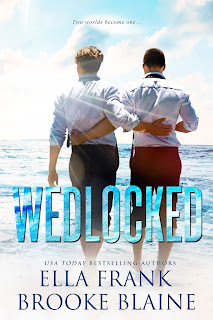 Note: This ARC was provided by the authors via Social Butterfly PR in exchange for a honest review.

As Ace’s eyes met mine, his breath seemed to catch, and then a slow smile spread across his handsome face. And just like that, the nervousness I’d felt all day was gone, and in its place was a rush of joy like I’d never felt before. That was my man staring up at me, and it was the way I’d always dreamed someone would look at me. Like I was his entire world.

And he was mine.

I can't believe it's over. It's been several days already and I'm still going through withdrawals. I know--KNOW--that all good things must come to an end...but...saying goodbye to PresLocke is breaking my heart!!! Waaaaah! I know that I can always pick up my e-reader and re-read their story from Aced to Locked to Wedlocked, but to have read the third and--gulp--final book in the series that first time and knowing that was it? Absolute mixed emotions. In the span of less than a year, Hollywood actor Ace Locke and model Dylan Prescott made me fall in love with them, and I have no one to blame but Ella Frank and Brooke Blaine. They should feel free to inflict this kind of thing on me (and hordes of other readers and fanatics) whenever they feel like it. I'm open to every other month each year.

After all the hoopla surrounding the revelation regarding their relationship and that very public proposal, Ace Locke and Dylan Prescott are only a few months away from tying the knot! Decisions need to be made and plans finalized, and while there are still things that are up in the air, one thing that Ace and Dylan know for sure is that they want their nearest and dearest to share this most important of days with them. Their family and friends who love and accept them--both of them--and want nothing more than for them to have their own happily-ever-after. So why not have the wedding at a place that's always believed that fairy tales do come true? But before they reach their happy ending, just like in any fairy tale, they'll have to vanquish a witch or a dragon or a combination of both.

What is it I can say about this book that won't make me sound like a sappy, lovesick PresLocke fangirl? Nothing. Absolutely nothing, because I honestly can't find anything to nitpick. I loved that this series ender not only gave Ace and Dylan an ending worthy of who they are and what they represent and mean to many readers, but also that it also brought together very familiar faces from three different series--well, at least three that I'm familiar with--Logan Mitchell and Tate Morrison from Ella Frank's Temptation series, Daniel Finley and Brantley Hayes and Derek Pearson and Jordan Devaney from Frank's Sunset Cove series (which is where Dylan originated from), and Ryleigh Phillips and Hunter Morgan, Shayne Callahan and Nate Ryan, and Paige and Richard Dawson from Brooke Blaine's L.A. Liaisons series (which is where Ace Locke first appeared). Throw in the always hilarious supporting characters from the PresLocke books, aka Ziggy, Sunshine, and Lennon, Dylan's family, and this was a rowdy crowd.

So, yes, the humor that we've come to expect is ever-present, as it should be, because Ace and Dylan's love story has always had that levity that balanced out all the drama and angst that they were forced to face, no thanks to Dylan's past which was being brought back to life by his evil birth mother and all the backlash regarding Ace's viability as an actor since he was more than just a leading man who happened to be gay. I was invested in their story from the moment I met Dylan and Ace separately in Devil's Kiss and Hooker, and the more I got to know them and watched them lust over each other in Aced and fall totally in love in Locked, the more I knew there was no turning back. I was a goner. PresLocke was the perfect culmination of this beautiful love story that brought tears to my eyes--both from laughter and heartache. From the weekend in Cabo to the meeting of families to the wedding itself, this was everything I wanted and so much more. There was also a moment with one particular character that has me wondering if something more is in store for that individual and their partner in the future, which means I'm going to have speed things up reading their story if and when my suspicions prove correct. Take note that the books need to be read in order, but trust me, they're worth your time. Five-plus stars for 2017 favorite Wedlocked. ♥

Read my reviews for the PresLocke series: