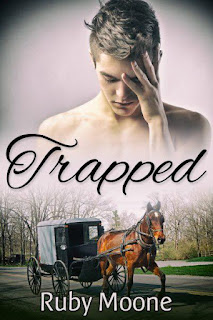 
I love it when a book surpasses my expectations for it. Trapped is a companion novel to author Ruby Moone's The Wrong Kind of Angel, which I read in December of last year. That novella was a pretty good read, but this full-length follow-up? It was everything I wasn't expecting it to be and I mean that in the best way possible. The story was fast-paced and kept me engaged from start to finish, there were a couple of twists--one that I didn't figure out until about two chapters before it was actually revealed and the other that totally took my by surprise--and the cast of characters made me care about them (which is always a good thing). While The Wrong Kind of Angel and Trapped are linked to each other, they can be read as standalones. My suggestion, though, is that you read the two books in order so that you have a better idea of all the characters and their connection to each other and to Dante.

Henri has been meeting Maurice in private for six weeks. They engage in acts that cannot be known by others outside the walls of the exclusive brothel known as Dante's that Henri visits three times a week. Already the two men have formed an attachment of sorts, one that Maurice intends to use in his favor and one that leads Henri to offer Maurice his assistance when the former notices the bruises on the latter's back. They also learn each other's true identities--Henri is the Earl of Chiltern, Tristan Barrington, and Maurice is Samuel Holloway, whose gambling debts led him to become a whore. Tristan goes above and beyond to help Sam start life over after escaping Dante's, but there are those who refuse to accept Sam's change of circumstances and when a moment of deceit comes to light, will there be any chance of Tristan and Sam to be free to be together or end up trapped by one lie?

My favorite thing about this book was the fact that the author kept me on my toes just as I would get complacent. From the characters to the actual story, I find myself not really being able to find anything I didn't like about this title. There's more than one source of conflict when it comes to Tristan and Sam's relationship, but everything is satisfactorily resolved here, so there aren't any cliffhangers to be wary of. I do think there's strong potential in one particular pairing, that of Lord Alfred Barrington and Gareth Scott, Tristan's cousin and Sam's best friend, respectively, along with a slight veering of direction in terms of the story arc when it comes to Dante's. You'll get what I'm talking about when you read the book. So, yes, I've got my fingers crossed that we'll still get at least one more book from this cast of characters, but for now, I'm a very satisfied reader and happily give Trapped 4.5 stars. ♥