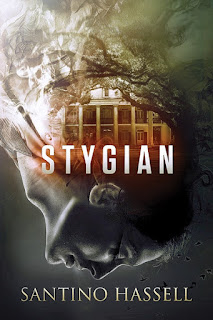 “I see you,” Kennedy said. “I’ve always seen you. And I’m human, kid. If you don’t think I want what you’re dying to give, you’re out of your mind. I just can’t stand the idea of it all going wrong.”

I can't believe it took me this effin' long to read this book. Someone smack me. But wait! I already read it and better late than never, right? Okay, so hold off on smacking me, especially since I was so damn taken by this M/M paranormal romance with a Southern gothic feel to it. Stygian is the story of Jeremy Black, the twenty-one-year-old drummer for the band from which the book's title comes from. He was chosen as the replacement for the former drummer who was killed in a car accident, but what once looked like a promising fulfillment of his dream to  be with his favorite band has become a torturous nightmare. The band's lead singer seems to hate him, the bassist spends most of his time offering himself up to the lead singer, and the guitarist? Well, Jeremy isn't entirely sure what twenty-five-year-old Kennedy Novak thinks of or feels for him, if anything. Maybe the planned band retreat will bring all four closer together and help them focus on their music. But being in the Caroway mansion appears to be stirring even more disharmony among them. Kennedy suspects something sinister is going on, but can he convince Jeremy to think the same or is he too taken by Hunter Caroway to even listen to Kennedy or anyone else?

Santino Hassell was like a spider that lured me--and I'm guessing a whole lot of other readers--into the web that is this book and I was one happily ensnared reader. There's a creepiness that I felt from the moment all four Stygian members arrived on Caroway-owned land, and while knowing that this is a paranormal story makes it clear that there's something otherworldly that's bound to happen, it's the kind of otherworldliness that took me a while to figure out. Hey, when you read and watch a lot of paranormal, supernatural, and preternatural stuff, you quickly realize there are a lot of categories to choose from. There are twists and turns--some expected, others not so much--and every single one had me excited to continue on, almost as if they were rewards as I moved from one chapter to the next. I swear, the story just kept sucking me in and for the less than two hours it took me to start and finish this novel, my attention never wavered. I wanted answers, damn it, and my questions were growing with each new little revelation that came to light here. Every time one curiosity was satisfied, Hassell would evilly dangle something else for me start spinning theories about, and the answer was always better than what I came up with.

Aside from trying to figure out what it was about the mansion that made it the way it was, there was also the interpersonal relationships among the four members and the two distinct couples that make up that foursome. Brian Watts and Quince (whose either first or last name I can't recall being mentioned) had me curious, especially in the aftermath of what happened to them in this book, but same goes for Kennedy and Jeremy. A bit of poking around Santino Hassell's website shows that there's one introductory short story and a few follow-up tales to Stygian, and I'm highly recommending you check those out alongside reading this paranormal romance. Also, as I was reading this novel, I immediately noticed Jeremy's last name and his hometown. Take note that I had read Insight, Hassell's latest paranormal romance story and the first in his new The Community series just a week before, so making the connection wasn't too difficult but I did want to verify it and got confirmation with a quick search through the text. Now I'm doubly curious as to whether there'll be a sequel to Stygian or if Jeremy (and Kennedy) will show up in future Community books...or maybe that's all wishful thinking on my part. Five-plus stars. ♥