Review: Say I'm Yours by Corinne Michaels (Return to Me #3) 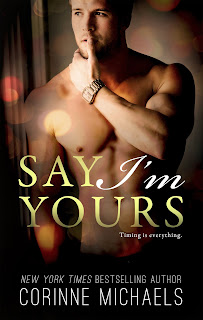 “Why?” I ask. This is what has me baffled. Why fight for me now when, a week ago, he was so willing to throw me away? “Why now?”

Trent’s hand brushes my cheek. “Because you’re mine. You’re my girl.”

I shake my head. “That’s where you’re wrong.” I grip his hand and remove it before gathering all the strength I have. It’s time to put “the end” on the end of our story. “I’m not yours, Trent.”

Two brothers down, and now we've got the story of the eldest one in the brood--forty-year-old Trent Hennington--and his on-again, off-again relationship with thirty-six-year-old Grace Rooney. For too many years, Grace has allowed Trent to set the pace of whatever it is they have going on. Now, she's reached the point where she has to put herself--especially her heart--first. It's time to let Trent and whatever hope she had that he would see her in the same light she saw him--as the person he's meant to be with for the rest of their lives. But Trent refuses to let her go easily. She's the only woman he's ever loved, but that's a sentiment that he isn't able to convey, which is just one of the sticking points between the two of them. Grace believes she's given Trent everything she can ever give, and maybe now it's time for her to give whatever's left of herself to another man...but not if Trent can help it.

Say I'm Yours is the third novel in bestselling author Corinne Michaels's Return to Me series. I know the books are touted as standalones, but I'm recommending they be read in order, especially because the cast of characters do recur, and in the case of the second and third books, some back story occurs for those couples in the preceding book or books. In the case of Trent and Grace, their relationship--which comes off as one of convenience in the beginning and almost as if Grace is more committed to it than Trent--is already in existence even in the series starter. From the get-go of book three, Grace decides to take her fate in her hands and doesn't merely put Trent on notice but acts upon all the pent-up thoughts and feelings she's kept within for too long. I seriously wanted to give the woman a high-five and a hug because she certainly deserved far more than what Trent was willing to offer her.

As much as I liked Grace, I loved Cooper Townsend, brother to Presley Hennington and one of Grace's closest friends. He also happens to be good friends with all three Hennington brothers, but his decision to pursue Grace after she ends things with Trent puts an obvious strain on his friendship with the man that Grace still clearly loves. Grace was more than upfront with the state of her heart, and I adored Cooper and how he refused to pressure her into doing something she didn't want to do while making a point of saying their friendship would always remain intact. He may not be a Hennington, but he was truly a good man, and the woman he has feelings for is finally given a name here. Dare I hope for a spin-off (since Cooper isn't a Hennington) or maybe a fourth standalone novel in this series for Cooper and the woman he cares for? Yeah, I'm not mentioning names. Go read the book, people!

Now, about Trent... I really, really, REALLY didn't like him for more than half of this book. He was a jerk. It was as if a toy he wasn't playing with was taken away and now he demands it be returned to him. He and Grace were kinda-sorta-maybe together and not together but always in each other's orbit for decades, and yet when it came time for her to move on, he was the one rushing her to commit to him? Seriously? Ugh! I get it. He needed to lose her in order to realize just how much he desperately needed her in his life, but I didn't appreciate how he want about it. There's being all alpha, and then there's being an ass. Kudos to Grace for making the choices that she did. She finally held her own, and Trent did manage to win me in his corner much, much, MUCH later on. So yeah, my rating is more for the story as a whole and Grace and Cooper as individual characters. Five-plus stars go to Say I'm Yours. ♥

Read my reviews for the Return to Me series:

Say You Want Me (book two) - five-plus stars - My Review