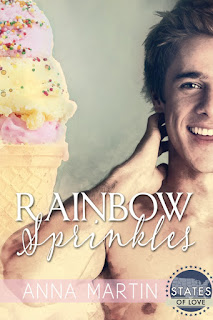 Rainbow Sprinkles is a novella written by Anna Martin and released as part of the States of Love collection of stories from Dreamspinner Press. This lighthearted story is about twenty-six-year-old Cooper Reed and twenty-three-year-old Andrew Tanner who meet over odd ice cream combinations always topped by rainbow sprinkles. Working at the Dreamy Creamery may not be his dream job, but he did have a dream of sorts when it came to coming up with his own ice cream concoctions. An added bonus is the hot customer that comes regularly--the same one that everyone knows is only Cooper's to attend to. When Drew finally decides to back up his subtle flirting by asking for Cooper's number, it's the beginning of the something more that's been simmering between them. But can the guy who plays princes while waiting for his acting break and the guy who has two jobs to keep him afloat truly make a go of a relationship? Not even rainbow sprinkles can brighten what could be a bleak future.

This was a quickie read, one that was sweet with a hint of steamy. Drew and Cooper were an interesting couple, and I could imagine them being two equally hot guys who weren't lacking for attention. When I said this was lighthearted, that's exactly what it was, though I confess that when they had their big blowout, it felt sudden and didn't make much sense as to why they were reacting as intensely as they were to what was happening. Honestly, I thought they both overreacted, though Drew more than Cooper so I wasn't too thrilled that it was Cooper who actually ended up reaching out first. I get wanting the best for whoever it is your dating, but there's such a thing as treading lightly. Yes they were in love, but who the heck wants their partner to feel as if they're being belittled or as if they're not up to par with whatever standards the other has set? That ending though was a good way to wrap this story up, and while Rainbow Sprinkles may not be my favorite Anna Martin read, it was still a fun, 3.5-star one. ♥