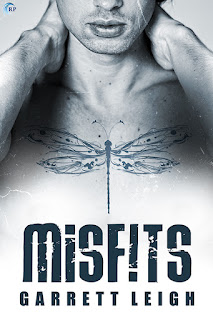 Note: This ebook was provided by Riptide Publishing in exchange for an honest review.

“I don’t know if we can make this work.”

“We won’t know unless we try, and I want to try. Jake taps into a part of you I’ve never seen, and I don’t want you to give that up.”

Tom watched Cass carefully. His affection for Jake ran deep, but Cass was the love of his life. If it came down to a choice, there was none. “It could get messy.”

Well. I do believe I've actually found myself a story about polyamory that didn't have me raising my eyebrow and keeping it raised for much of the story. Don't get me wrong. I'm cynical by nature and I did raise my eyebrow in skepticism at one point in the story. However, Garrett Leigh's Urban Soul series starter opened my eyes--and yes, for you sappy folk out there, my mind and heart as well--to a relationship that is often prejudged and misunderstood. I need to say "thank you" to carrot dangler extraordinaire Kelly Miller for pointing out how remiss I've been for not having read Misfits before this past weekend. She made me see the error of my ways and after reading this book, I am grateful. I know--better late than never, but damn it, I should have read this two years ago!

Thirty-year-old restaurateur Tom Fearnes's life is about two things: the businesses he's created under the Urban Soul name and his love for his partner of nine years, twenty-eight-year-old chef Cass Pearson, with Cass coming first always. But the success they've achieved comes at a heavy price--they've barely had much time to simply be together. When Tom comes across twenty-five-year-old waiter Jake Thompson at a far from impressive restaurant Urban Soul doesn't own, he can't deny that there's something beyond Jake's good looks that calls to him. But after one night together and being found by Cass in bed the next day, Jake can't wrap his head around the idea of Tom and Cass's open relationship. But could Jake be the very thing that Tom and Cass never realized they were missing?

Okay, a quick explanation on why I'm wary about tales of polyamory. Based on the books I've read with this as the subject matter, one character always seems to be more in love with one other member of the threesome or triad, so I don't really get the feeling that the love is equal or the same on all three sides. But Garrett Leigh's take on polyamory and how she presents it in this story gave me a pause and had me seeing it from a wholly different perspective. There's no question here that Tom loves Cass and that Cass loves Tom. There's also no question that Tom falls in love with Jake and vice-versa. What we get to privy to here is how the new dynamic works among all three men and how Cass and Jake, who both love Tom fiercely, form a kinship that evolves into something deeper.

Among these three main characters, each of whom tell the story from their respective perspectives at various points of the story, Tom may seem like the one with the fewest issues, but he does come off as someone with a hero complex of sorts, which complicates his relationships with both Jake and Cass. Jake's Tourette's syndrome, which Jake calls TS, and Cass's dark past add more layers of complexity to their story, but it's a story that's surprisingly easy to follow and is simply about loving and accepting someone and wanting, not just opportunities for them, but having them claim those opportunities and recognizing that they deserve the good that comes their way. I may be two years late, but any day can be a good one to read a book as impressive as Misfits. Five-plus stars. ♥