Review: Looking Back on Forever by Kat Alexander 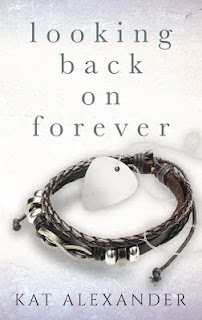 Looking Back on Forever is the debut of new author Kat Alexander and she has certainly made her presence known with a well-written and well-thought out second chance love story between two unforgettable protagonists who prove true love always finds a way. Claire Sawyer and Noah Gish meet when they're both seniors, she seventeen, he eighteen, and they fall in love. But even love is not enough for two people to stay together, as Claire and Noah are forced to face a variety of challenges in their respective lives and with their relationship. But that very same love, given some time to mature and become even more potent and palpable, can be the very thing that makes you want to try again, this time hoping that you're stronger than you were before, ready and prepared to fight for the person who means most to you. Sometimes, forever is waiting 'round the corner for you, for you to find again.

This was an impressive debut, a heartrending read that puts you through the emotional wringer and makes you wish that you were actually there, among the characters, wanting to give your two cents, hoping that one of them will listen to you so that they can be spared the heartache and you the headache as you read in frustration when they do or say something you already knew would bring them trouble. There were several times I seriously wanted to knock some sense into Noah, but in hindsight, those missteps were necessary. After all, we're all supposed to learn from the mistakes we make in life. There's a lot of angst in the story, though not exactly copious amounts of it just to make you shed more tears. This is the kind of romance that you need to experience alongside the characters in order for you to fully appreciate their journey. Looking Back on Forever is a tad long, but worthwhile. Five stars. ♥

Purchase Looking Back on Forever on Amazon | B&N | iBooks | Kobo.