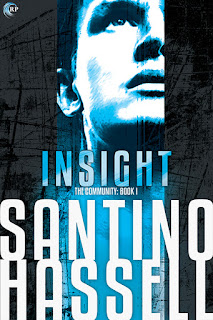 Everything about the moment, from the tight grip of Trent's hand on his upper arms to the hick rod of his dick pressing up against Nate's thigh, was perfection. No one had ever worshiped his mouth this way. Had ever drawn him close and drank him in with such hunger. And he'd never experienced the wondrous sense of such a massive onslaught of impressions--affection, lust, love.

Nate clung to Trent, desperate for this to be real, or to pretend it was for this one moment.

All of my Santino Hassell reads have been contemporary romances--his Five Boroughs series, his co-written Cyberlove series, and his short story in the Follow Me Into Darkness anthology--so his new paranormal romantic suspense series, The Community, is something new for me, although he has other previously published work under the same or similar genres (I actually have one standalone and one anthology, Stygian and Lead Me Into Darkness, respectively, waiting on my e-reader to be read). I left all my expectations save for one at the proverbial door before starting this novel, and that one expectation was the high quality of storytelling I've gotten used to from Hassell. I didn't just get high quality with this book; this was downright stellar writing and is the author at his best.

For years, twenty-one-year-old Nathaniel Black has kept his head down, knowing all too well how people in his hometown of Brookside, Texas see him and his infamous family. You see, Nate is an empath, as are the other Blacks, all with varying ranges of powers. When he receives a vision of his estranged twin brother Theo's death in New York and its ruled a suicide, Nate knows he needs answers. Along the way, he gets a ride from Trent, a graduate student from California but native New Yorker. Their connection is immediate and intense, but as the secrets surrounding his brother's death begin to unravel, Nate questions if what he and Trent share is real or if something--or someone--else is at work. Who can Nate trust if he can't even trust himself as he finds Theo's killer?

Insight was the trifecta of fictional awesomeness. It had paranormal, suspense, AND romance elements--each one a favorite of mine but when melded together in the name of creative genius to be shared with the world? Hell, yes, please! I had a running list of suspects and I had all these theories regarding what the Community actually was. The one thing I was sure of was Nate and Trent belonging together. Even my being anal about needing to know Trent's age and last name (I know, it's a quirk of mine when I read) took a backseat to absolutely absorbed I was by everything that was happening to and around Nate. He was discovering things about himself and embracing--at least to a certain degree--his powers and how he can make it work to his advantage, especially in times of trouble.

There are several secrets that are revealed in this first in a series but it also ends in a cliffhanger, so it does feel like the new tidbits of information Nate is able to learn here are part and parcel of a bigger war of sorts that awaits him and two other significantly memorable supporting characters--Holden Payne and his half-brother Chase Payne. I quick peek at the synopsis for book two, Oversight, points out it's about Holden, so I'm kinda-sorta expecting book three to be about Chase. Yes, yes, I'm totally making assumptions here and I know what they say about people who assume, but hey, I'm just putting it out there. When you read Insight, you'll see why Chase is worthy to have his own novel as well. I highly recommend you read the five-plus-starred Insight and add Oversight to your TBR list. ♥