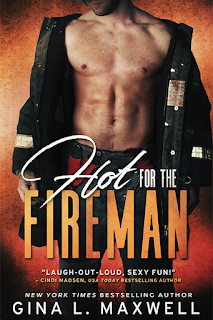 Even though I've got several of her books on my e-reader, I'm a tad embarrassed to admit that Hot for the Fireman, the first in the Boston Heat series, is my first ever Gina L. Maxwell read. I know, I know. Shame on me. But hey, a book as hot and as good as this series starter was an excellent way to pop my Gina L. Maxwell cherry, if I do say so myself. It's also a great reminder that I have some of her other stuff on my e-reader and that I've been an idiot taking as long as I have to get around to reading them. See? I can admit my own failings, shameful as they may be.

Former Army Ranger turned firefighter and current lieutenant with Rescue 2 of the Boston Fire Department Erik "Wolf" Grady has been suspended until the therapist--who happens to specialize in PTSD--signs off on his return to active duty. He isn't exactly thrilled at the idea of having to spill his guts over his time in the army and why his PTSD has been triggered by a recent rescue. He'll take the mandated visits to the shrink over becoming a desk jockey. But before that, he wants a distraction and it comes in the form of a hot woman in red at the nearby liquor store...

Olivia Jones is done with dating. Venturing back into that world of getting to know someone else and having to be extra careful about what it is she shares so as to keep them interested was a long time coming and now, she's taking a break again. But a one-night stand is different, right? How could she say "no" to the all too tempting offer that a man named Wolf gives her? No names, no personal information, just dirty sex. But when Wolf turns out to be her new client--one who makes (and wins) a bet that leads to three dates--simple becomes complicated quickly.

I remember reading somewhere on Facebook--I think it was on the Rebecca Yarros' Flygirls group that I'm part of--that Gina L. Maxwell writes dirty sex really well, and I had the proof right in my hands with Hot for the Fireman. The sex was indeed decadently dirty, but the romance? Absolutely swoony! Erik Grady is damaged to a certain degree, but there was no doubt that he was all in when it came to his Livvie--Olivia Jones. She was his main priority in every move he made and every decision he felt was best when it came to their relationship and to Olivia herself.

Aside from the sex and romance, there's a deeper story involving loss and the feelings of regret and guilt that emanate from choices that both Erik and Livvie made in the past. They're equally protective of one another and the selfless love and affection they have for each other had me sighing in giddy satisfaction. We also get more than a sneak peek at what's brewing between who I suspect will be the next couple in the series as well as tidbits about the rest of the guys in Rescue 2. Hot for the Fireman was a great series starter and I can't wait for more! Five stars. ♥