Review: The Hard Truth About Sunshine by Sawyer Bennett 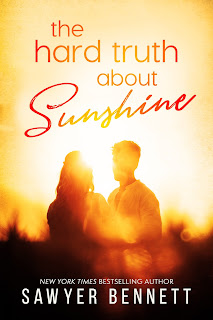 “Each of us here,” Goth Chick says with a sweep of her arm around the fire. “Each one of us hates our life. It’s a burden to us. It’s unfair. It’s nothing but misery and torment, and we’re pissed we’re the ones who have to suffer it. Maybe not to the same degree, and not for the same reasons, but it’s the absolute tie that binds every one of us.”

The first time I experienced Sawyer Bennett's writing was through a series that started at a bar known as the Last Call and I know all about Sawyer Bennett's hotties that make up Cold Fury Hockey. I'm familiar with the world of Wicked Horse as well as the tale of bittersweet revenge in Sugar Bowl. But her latest release is different. There's a darkness--almost a bleakness at times--to it that sets it apart from her previous work that I've read. It's a journey that four individuals take part in--though some begrudgingly so compared to others--and in the process, learn more about themselves and discover the power of love, friendship, acceptance, and hope. There were countless moments of frustration and irritation as well as elation and affection for these four--Christopher Barlow (twenty-six), Jillian Martel (twenty-one), Barbara Stiles (twenty-four), and Connor McCann (seventeen), with the latter three nicknamed Sexy Eyes, Goth Chick, and Dead Kid by Christoper, and not in an affectionate manner as you'll see from the moment they meet as part of a peer-led support group for those suffering from PTSD and depression.

Narrated by Christopher, the story does have both he and Jillian as the main protagonists, though if I'm being totally honest here, Christopher was really antagonizing for quite a few chapters in the story. Connor and Barb are supporting characters but their back stories are just as moving, if not even more so. Christopher is a former marine whose apathetic and disdainful outlook on life is more worrisome than the injuries he returned home with. He sees Jillian's positive, almost sunshiny way of accepting things as an aberration, yet he can't seem to keep his distance from her. Together with Barb--who was abused, has attempted suicide in the past, and suffers from depression--and Connor--who has been diagnosed with alveolar rhabdomyosarcoma, a form of cancer, and has been given only months to live. They bicker and squabble during their trip together, but along the way, they learn things about each other and about who they are as individuals. The question is, will they be able to come to the realization that they're quite stronger than they perceive themselves to be and that there is strength in numbers?

I've enjoyed quite a few of Sawyer Bennett's novels in the past, but who would have thought that it was the one with far more poignancy and provocation that would call to me and become my favorite? She's taken four very different people in their twenties, each one suffering a certain kind of fate, and she allows her readers to become a part of their journey and it feels like such a privilege to do so. It's ironic that it's the two characters who have their futures already set that prove to be far more accepting and choose to embrace that fate and make the most of what they have left rather than wallow in what's been missed and what could've been. Jillian may be seen as a Pollyanna, but making the decision to see the proverbial light and focus on it and keep it close by rather than the darkness that slowly but surely takes over her sight is far more difficult than others may believe. She was awe-inspiring, as was Connor. If I could recommend one book that you need to read as soon as humanly possible, it would be The Hard Truth About Sunshine because some truths just need to be shared. This receives five-plus stars. ♥