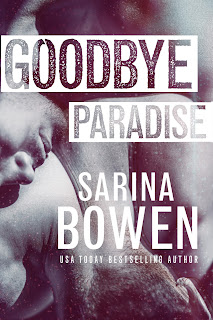 For all his nineteen years, Joshua Royce has known little else than what Paradise is like. Paradise Ranch, that is; the religious community his family belongs to. The other thing he's always known is Caleb Smith, his best friend and the guy he's been lusting over for years. It's a secret he's kept, knowing all too well what it's revelation will mean, not just for his standing in Paradise, but for fear of how Caleb may shun him. But Caleb has a couple of secrets of his own, and when an incident becomes the perfect excuse for the elders to cast Josh out, one of those secrets is pushed to the forefront and has Caleb rushing to put has plan into action. The time has come for them to bid farewell to Paradise, but is either one of them prepared for the world beyond and for their feelings for each other?

Sarina Bowen is a go-to author for me, so when she announced that she had a new M/M series set to be released, adding it to my to-be-read list was a no-brainer. I soon realized that Goodbye Paradise, the first in her Hello Goodbye series, was actually published in 2015 under the nom de plume Nealy Wagner and with a different title, In Front of God and Everyone, and was the opening salvo in her Pay It Forward duet. And yes, I already had both books on my e-reader waiting to be read. If you're familiar with my reviews or know me well enough, you'll know that I have books upon books--digital and otherwise--that I've already purchased but haven't gotten around to reading. But hey, I'm not complaining since I am, after all, very much somewhat of a self-confessed book hoarder.

Bowen did say that the contents of both books are the same but I did skim through the original release just to compare, and there was a slight change in one character's name, making him no longer inconsequential in the new edition as well as an addition that further tied, albeit loosely, to one of the author's books, Keepsake, which is the third one in her True North series. If you've read Keepsake, you'll know who I'm talking about, but you can read Goodbye Paradise without having read Keepsake, although the tie-in is rather a fun tidbit and had me geeking out since I'm such a Sarina Bowen fangirl. I'm also highly recommending the True North series, which may not be M/M romances, but these books showcase just how capable the author is in creating love stories totally worth falling for.

Josh and Caleb may have both come from Paradise, and while they do have similarities in their upbringing, there are vast differences when it comes to their experiences. Seeing how they would react to their new circumstances was fascinating, and when I say "new circumstances", I'm not just talking about being away from the only home they've known--which was more like hell on earth than an actual paradise--but also their long-buried love for one another. When you're reared in a way that is more about fear and condemnation than care and concern, then every move that's opposite of what you were taught was "right" comes off as sinful and something to be shameful of. Josh's and Caleb's journeys are both separate and united, having to assimilate while being true to who they are.

Paradise kept them imprisoned to a way of life that would have killed who they were on the inside, but life in Massachusetts had them feeling imprisoned because they were gay and were hesitant to be open about both their sexuality and the new status of their relationship. Through their struggles, both Josh and Caleb had their stumbles and successes, and through it all, their story was inspiring. Sarina Bowen makes good use of her patented mix of wit and angst alongside imperfect characters that readers can both empathize with and recognize, at the very least, a part of themselves in. The end result is a book that tugged a smile out of me more than once while also tugging on my heartstrings. I'm happily recommending you say "hello" to Goodbye Paradise, which gets five stars. ♥

Learn more about about Sarina Bowen.