Review: From Top to Bottom by Kevin Klehr 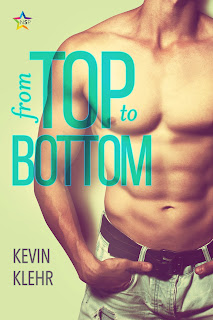 From Top to Bottom is a novella and my first read from Kevin Klehr. Tony has always been a top and he's never really considered being a bottom until his curiosity gets the better of him and he decides to satisfy it by putting up an ad looking for like-minded tops. Who he finds are Butch, a bear in an open relationship, and Ford, a buttoned-up guy in a committed relationship of his own but whose partner has no clue he's agreed to experiment. Can three dedicated tops find a way to transition to becoming bottoms or could this thing have "disaster" written all over it?

I'm rather torn about this quickie of a read. Let's go with what I liked first. Tony's quirky conversations with his, erm, overly interested father about his being gay and his sex life were a hoot. If my parents were THAT curious about what I was doing with whomever I was with, I'd probably have an asthma attack. There's also Tony's instant connection with Butch, who's truly a good guy and whose own relationship had my heart breaking for him. Tony himself was okay, and Ford was...well...he was odd. I get what he was there for, but Ford wasn't a favorite of mine.

I liked the humor in the story, but there were moments that things got weird. Case in point: the poetry-laden orgy. Yeah, you'll have to read the book to figure out what I'm talking about. There's also the thing about Tony's crush on one of the guys and yet having no qualms getting it on with several other men. What really prevented me from absolutely loving the book was my lack of connection with the main character and his own stilted connections with those he was with, save for his father. From Top to Bottom held promise, but it faltered, so I'm giving it three stars. ♥