Review: The Faintest Spark by Christina Lee (Roadmap to Your Heart #1.5) 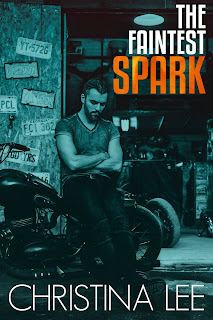 Sawyer stared directly into my eyes, and I wasn’t sure what he saw right then, but maybe I provided an anchor for him because his shoulders unwound just a fraction. His gaze briefly traveled down to my lips before sliding back to my eyes, and fuck if that didn’t stir the faintest spark inside me. I didn’t understand what it meant, but I felt the need to pull him into my arms and comfort him. Make it all better.

I...I can't believe it's over. Why do all good things have to come to an end, damn it?! It's like one favorite series after another the past few days, and over the weekend, I read the final book in yet another favorite, The Roadmap to Your Heart. Mixed emotions ran rampant because while I was privileged to have met characters that inspired and to have read stories that made me feel, there was also that heartrending moment when I reached the end of this novella and knew that the series was bidding farewell. I know that readers and fans can always go back and read these stories again--that's one of the fantastic things about books--but that first time you read a story, that is something else entirely. In the case of Malachi O'Rourke, he was a lingering presence in one of my all-time favorite novels, There You Stand, and was there yet again in the Roadmap series starter, The Darkest Flame. The man knows all about loss, but fate has given him an opportunity--to find love and happiness again. Only this time, they come in the person of someone unexpected, and Mal will have to decide if Sawyer Malone is worth risking everything for.

With Mal O'Rourke being the president of the Disciples of the Road motorcycle club, he's working his way to cleaning up the mess his father left behind. He wants his club to venture into legitimate businesses. He's also highly protective of his brothers, but Sawyer Malone isn't a Disciple. He belongs to another MC. However, Sawyer goes above and beyond for his own club, the Scorpions MC, and for the Disciples, doing things that continue to haunt him even after all was said and done. It's Mal's reassuring presence that grounds Sawyer, but there's something else there and it's something that both men are hesitant to acknowledge. Mal has only given his heart to one person and ever since the passing of his old lady, he hasn't been interested in pursuing anything even close to what he once had. So why is this fledgling friendship with Sawyer something that has come to mean so much to him so quickly? Could this be nothing more than affection for a new friend or could this be a trigger, one that Mal has never dared venture into nor contemplated even doing...that is, until Sawyer began to mean far more to him.

I had a box of tissues sitting next to me as I read The Faintest Spark, since I've been known to shed a few tears for some of Christina Lee's novels in the past. No tears this time around, HOWEVER, that flutter in my tummy and that squeeze in my heart were ever-present, as they tend to be when I read anything penned by this author, one who seems to know exactly which of my heartstrings to tug on. I'm so glad that Mal finally gets both his story told and his happy ending. He's always come off as a good man who had integrity and loyalty and genuine care and concern for those who became a part of the family he surrounded himself with. Sawyer was a supporting character who more than made his presence felt in The Darkest Flame, and while their novella can be read as a standalone, I'm highly recommending you read the full-length novel first so that you understand exactly what it is Sawyer sacrificed for his club and Mal's. Their story has a bit of grit and a rough-and-tumble romanticism that Lee wields with perfection. The Faintest Spark is a quick read that continues to stay with me days after. This garners five-plus stars. ♥