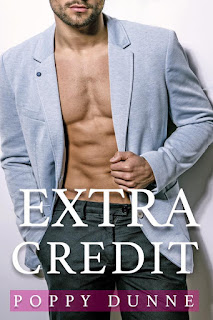 Note: This ARC was provided by the author via Book Enthusiast Promotions in exchange for an honest review.

My introduction to Poppy Dunne was her debut release, Room Service, and it was a really good introduction to her ability to write truly funny moments in her love story with a tinge of drama and angst thrown in. So, I was definitely looking forward to reading her sophomore effort to see if she's leveled things up, and by God, she has! Extra Credit was downright hilarious but not in that dumbed-down manner that I abhor. She respects her readers by giving them laughs but never underestimating their ability to appreciate the selection of humor she can dish out. Yes, there are the quick laughs and the giggles because of those uncomfortable yet silly moments, but there are those occasions that the main characters find themselves in that are humorous but also give you something to think about. Her first book made me take notice, but her second book has made Poppy Dunne an author to watch.

Twenty-eight Chelle Richardson notices the hot guy with the bull mastiff and Bluetooth along the Runyon Canyon trail, but quickly pegs him as an overly privileged man with too much money and thinks he's God's gift to women. When she sees thirty-two-year-old Will Munroe again, it's at a "cleansing process", also known as a parent-teacher conference in every other school that isn't Bay at Dreams, the school where Chelle works as a substitute drama teacher. Who would have thought that the buttoned-up stock broker is the very single father of ten-year-old Amelia, an exuberant student that Chelle adores? His being a parent and her being his child's teacher should take care of whatever attraction she has for him, but one pancake breakfast later and it's clear that Will wants her. But will their differences, their jobs, his kooky ex-wife, and her parents who literally clown around end things for them?

I loved Chelle and Will, who appeared to be such opposites, but brought out those sides to one another to make it clear that they were each other's perfect match. She made him see that he could be a father to Amelia and still be happy in his personal life, and he anchored her to the possibilities of something more stable and permanent. There were many a zany moments with these two, and there was no turning back from the moment she showed up in her Voltron t-shirt and yoga pants at the wine bar. The supporting characters also provide more levity to this already funny tale, but it's never to the point of being too much. The romance and sex were top-notch and that ending? So. Damn. Sweet! I know she's just released Extra Credit but I'm already excited to see what Poppy Dunne is going to give readers to smile and swoon over next. She's a rom-com author worth keeping an eye on. Five stars. ♥