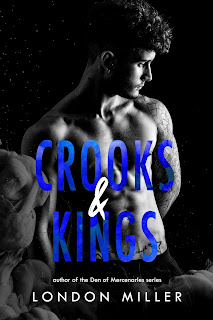 I've just added a new name to my list of must-watch authors and it's London Miller, author of the new Wild Bunch series, which is a spin-off of her Den of Mercenaries series, which I have yet to read but have now scribbled on to my to-be-read list. Clearly, this was my first Miller read but after being blown away by Crooks & Kings, it most certainly won't be my list, not with me itching to get to know the rest of the Wild Bunch and learn each of their stories. This had sex and romance balanced perfectly with action and suspense and the writing was totally brilliant.

Outside of those closest to him, Christophe Lupei is known only as Fang. After one devastating loss that leaves him laden with guilt, Christophe shuns himself from his family and the life he once knew. He didn't think it was possible to feel again until he meets Mariya Kuznetsov. She's on the run from a past, needing to be hidden if she wants to stay alive. He walked away from his own past, pretending to live a life he wishes was different. When these two get together, it was supposed to be nothing more than mutually beneficial, but love doesn't care what your plans are...

Now, remember, I had no clue as to what the book was about other than the short synopsis it came with it. I'd also never read anything by London Miller prior to this one, so all I could do was hope that the book was, at the very least, entertaining. Well, hello, it was so much more than that. This kept me on my toes. I seriously only wanted to get a few chapters in before calling it a night, but nooooo! I couldn't put my damn e-reader down and spent nearly three hours reading. Christophe and Mariya had me very curious and Miller satisfied my curiosity impeccably well.

As a series starter, this ticks all boxes. It's focus is on Christophe and Mariya, their back stories and their story as a couple and as individuals after their paths cross. It gives us enough of a backgrounder regarding several of the supporting characters to make us wonder about them, resulting in turn in my wanting to read one series and needing more from this one. Christophe and Mariya's story is resolved here, so there aren't any cliffhangers to worry about. All in all, Crooks & Kings is one of the most satisfying and promising books I've read lately. Five stars. ♥