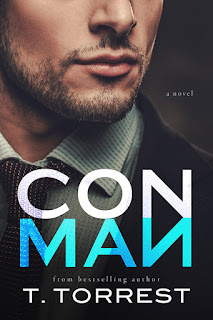 Con Man is a standalone romantic comedy novel from T. Torrest and if you've heard of this book before, make sure you read the synopsis carefully. It mentions male main character Lucas Taggart, who is a "con man" or a man who helps his clients gain their self-confidence, and one female character, Ainsley Carrington, who is a client and the first one ever to make Luke wish that he could cross the line and have her become his and his alone. Note that there's the mention of another name: Mia, who is actually Mia Cruz, someone that Luke meets after he meets Ainsley. I've read quite a few reviews on Goodreads and even a couple on Amazon that expressed their frustration over a misleading synopsis slash blurb. I noticed Mia's name, and me being the suspicious person that I am, wondered if she cold be the twist to the story. I mean, why mention her, right? So, this is why I'm pointing her out now, so that you don't go into the book expecting it to be all about Luke and Paisley, erm, Ainsley, and then have Mia spend just as much time with Luke. Watch out for Blake Atwood and Jared, whose last name isn't mentioned.

Now, here's the thing. My rating for this book is what it is, not because of the whole synopsis "fiasco"--though I think of it more as the author probably wanting to surprise her readers with a twist of sorts--but because it took such a long time for Luke to come to his senses and notice what was right in front of him the entire time. It was honestly frustrating, and for a man who's made a business out of recognizing what needs to be worked on when it comes to his clients, Luke was clueless for much longer than seemed possible. I don't really have much of a problem when it comes to the characters and how they were in the story. Mia and Ainsley were actually good female main characters, a study in contrasts, if you will. Jared was an entertaining distraction from what was really going on between Luke and Mia as well. All in all, I appreciate what the author tried to do with this story. Do I think she pulled it off? Not entirely? Do I think the book was terrible? Definitely not. But Con Man was slow burn times however many pages the book was, and I admit it: I was tempted to skim more times than acceptable. Three stars. ♥