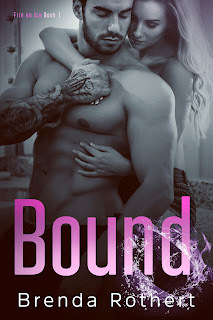 Bound is the first book in author Brenda Rothert's five-book hockey romance series, Fire on Ice, which centers around professional hockey players belonging to one team in Chicago. The series starts off with the story of two people--twenty-seven-year-old Chicago hockey player Jason Ryker and twenty-two-year-old psychology graduate Kate Camden--who have experienced their respective losses and work their way through their fears and feelings of guilt in order find love and happiness. It's a lighthearted, oftentimes sweet, and other times a smidge angsty read.

When Ryke lost his wife in a car accident nearly two years ago, he found some amount of solace with a bereavement group. It's usually the same faces he's surrounded by, but then he notices a new one, and his heart breaks for Kate when she tells them of how she lost the baby she was carrying. When he offers her a job as his assistant, he was doing so because he wanted to help her out--and maybe spend more time with her outside of their group. As tempted as he is by Kate, though, Ryke can't give up his hockey career for any type of relationship.

Kate desperately needs a job to keep her occupied enough so she doesn't dwell on thoughts of her child. Being part of a bereavement group was supposed to be about finding a release, so getting a job offer from a pro hockey player was definitely a surprise. She hasn't been with another guy ever since she found out she was pregnant and was promptly abandoned by her baby's father. She's developing feelings for Ryke, but the last thing she's ready for is the possibility of her being with resulting in a pregnancy. Can they have a future if they're bound to their pasts?

This book was truly mostly about Ryke and Kate and how they mourned their respective losses and taught themselves and each other that it was okay to move on with their lives. The most prominent supporting character would have to by Ryke's best friend, Luke Hudson, whose own story is the third book in the series. Ryke is great as a male main character. He isn't perfect and he's got his own ideas in his head about relationships, shaped mostly by his marriage, but it's clear from the get-go that he sincerely cares about Kate and that he wants to be with her.

Now Kate had me going back and forth a bit because she was doing the same thing. She wanted Ryke and she would be into whatever they were intimately doing, and yet she would back off. Ryke was patient, and I wouldn't demand that she make up her mind since they were only into their non-relationship a couple or so months, but she would get jealous. If you don't want to lay claim over someone, you have no right to be jealous or make the other person feel bad simply because they're in the presence of the opposite sex. FYI, there was NO cheating here.

There were times that I felt that the flow of the story would shift abruptly, and that kind of had me pausing a bit since they would go from being distant to suddenly flirting again and vice-versa and so on and so forth. Other than a few hiccups though, I did like the story and Ryke and yes, Kate did win me over later on. I know that the second book is a continuation of there tale--although, for the record, book one doesn't end in a cliffhanger, so no worries there. This was a good start to the series and I'm interested enough in continuing on. I'm handing Bound four stars. ♥