Review: No One to Hold by Arell Rivers (Hold #1) 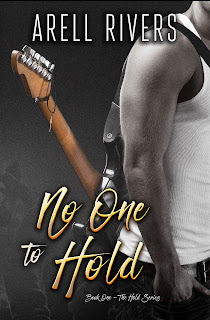 Note: This ARC was provided by the author via IndieSage PR in exchange for an honest review.

No One to Hold is the debut release of Arell Rivers and is the first in her Hold rock star romance series. It's the story of Cole Manchester, a musician who just happens to be a superstar that women fall all over themselves for. It's easy enough to understand. Cole is good-looking, charming, and can actually back up his reputation with talent. But for all of the women he's been with and all the success he's achieved, Cole is lonely and nothing brings that into sharper focus than an unexpected tragedy. He wants something deeper and more meaningful with someone and the woman that's snagged and continues to hold his attention comes in the form of a wallflower publicist named Rose Morgan. She works for him and she's gone through more than her fair share of heartbreak, so Cole should be treading carefully since he can't seem to stop himself from not pursuing her. But there's one person who wants Cole all to themselves and the introduction of Rose into Cole's life is an impediment to their plans. When fates collide, will Cole and Rose have anything left of their very fledgling romance for them to actually hold on to?

I tend to give new authors a wee bit more leeway than more established ones, mostly because they're still getting their feet wet in the wild and wacky world of publishing, which also happens to include dealing with readers, bloggers, and so on. Arell Rivers certainly has the makings of a good author. She's put together the first in a series of three novels--though all of the books in the trilogy were released simultaneously--and given us something worth reading. The theme is a familiar one--imperfect rock star who wants to better himself and finds salvation in the love of a woman who isn't his usual fare. There's a hint of mystery and suspense that she's added here and it makes for an interesting touch. Her main characters, Cole and Rose, are entertaining and they've got a camaraderie that helps make their burgeoning relationship somewhat believable. I do think that with more focus on character development, wherein we're able to experience the evolution of both Cole and Rose as individuals alongside them, would make this an even better read. All in all, I commend the author for a satisfactory first effort. It gets four stars. ♥