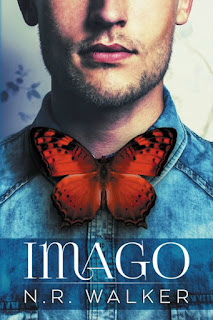 I groaned into his kiss and pulled him against me. He came willingly, melting into my arms. He gave himself to me in that moment. In that kiss. He was putty in my hands, and I wanted to mould him, I wanted to take him, claim and make him mine.

All this from just a kiss. My world had tilted on its axis, nothing would ever be the same again.

From just one kiss.

N.R. Walker has a way with words and her prose gets to me every. Single. Time. Match that up with her ability to give her fans and readers stories that are extraordinarily different from the usual M/M romance fare and it's easy to see why so many of us are hooked on her stuff. The scrumptious icing on top of that proverbial cake of fantastic fiction are her characters that never fail to make me swoon, smile, and wish they were real so that I could give them hugs, even though I'm honestly not that much of a hugger. See, her men inspire that sort of reaction. They make you want to be invested in them and their story. Latest case in point: twentysomethings Jack Brighton and Lawson Gale, whose whimsical romance is sheer perfection in Imago, the first in the new series by the same title.

The flight from Melbourne to Launceston had Parks and Wildlife officer Jack Brighton and lepidopterist Lawson Gale discreetly take note of each other, but it was the ride from the airport to the museum and the knowledge that Lawson was going to be staying in Scottsdale--the very same town that Jack considered home--for a week that had the two men agreeing to a date, maybe, possibly, hopefully, the first of several more. With Lawson on the quest for a supposedly non-existent butterfly species, Jack wants to make the most of their time together, even sharing it with his beloved border collie Rosemary. But with the clock counting down and Lawson's growing frustration over his search, will Jack actually be able to capture the elusive heart of a bow tie-wearing genius of a man in Lawson?

Imago kept my own heart thumping quite happily from start to finish. I adored Jack and Lawson as individuals and as a couple. They were like this unlikely pair, but then they're usually the ones that capture my heart when done exactly right, and oh boy, did N.R. Walker do these two just right. Wait, that sounded dirty once I saw them actually typed out. And yes, these two do get dirty, but it's that perfect balance of nice and naughty and everything else in between that has me squeeing like a teenage fangirl. I couldn't get enough of these two and how they went from one date to another, with Jack trying to outdo each perfect date and Lawson reminding him it was about the company, not the food. In their limited time together, there was such an undeniable evolution to their relationship.

Lawson's search for the non-existent butterfly was fascinating. I like butterflies. One of the highlights of a family vacation a few years back was a visit to the butterfly sanctuary. However, I've never really taken the time to research them or find out what the various species are. Now, Lawson has me all curious, and yes, I did a bit of Googling every time he shared his tidbits of knowledge with Jack. The man truly is a genius, but Jack is no slouch in the intelligence department either. They also happen to both be environmentalists to some degree and that was another check in the plus column for this book. See, that's why I love N.R. Walker's books. They're more than just romances. They make you interested in more than the characters getting together, though that's the ultimate goal.

The book is romantic and has a smidgen of suspense as well. It's got a nerdy whiz of a lepidopterist who was, at times, fit to be bow tied, and a hunky Parks and Wildlife officer who adored his dog and discovered he had a thing for bow ties. it's got a cast of supporting characters that were more memorable than I expected them to be and a setting in Scottsdale, Tasmania that had me curious as to what it would look like in real life. The author colored me surprised when I saw that there was a sequel to this book on Goodreads because it honestly felt absolutely impeccable as a standalone, and that's what I thought it was going in. But I'm not foolish enough to say "no" to a second book, especially if it's still about Jack and Lawson. I highly recommend Imago, easily giving it five-plus stars. ♥