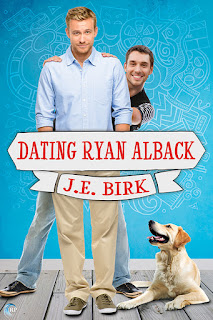 Dating Ryan Alback is a lighthearted M/M romance written by J.E. Birk about a Hollywood actor and a middle school English literature teacher who are set up on a date by a television talk show host...on her talk show. Yep. Ryan Alback's life is private, or at least he tries to keep it that way, a major feat when you work in an industry as public as entertainment. All it took was one experience of someone breaking his trust for him to be wary of getting into any sort of serious relationship with another man. He's happy staying home and spending time with his skittish Golden Retriever, Alby. When a talk show host decides to play matchmaker, Ryan balks at the idea. However, his agent agrees to the public blind date, believing it'll be good for Ryan, personally and professionally. But one weekend in Vermont with Jason Santos has both men considering the possibilities of future dates...that is until Ryan hurls accusations towards Jason and they go their separate ways. Will it be too late for Ryan to realize his mistake and by then, will Jason--who's been burned in the past as well--even want to give him another chance?

This was my first J.E. Birk read and it was an enjoyable one, with bonus points for Ryan having such an adorable--albeit extremely anxious--sidekick in Alby. I liked Jason straightaway, not just because he was a teacher and that he liked Alby, but because he appeared to be quite genuine, especially when it came to his Family First foundation and how much he cared about his students. This touches upon a very real and current situation going on in the US--the deportation of illegal aliens and the US-born children they're forced to leave behind--and while it may not have been at the center of the story, it was an important part of the book. Other than the moments that deportation is touched upon, the rest of the book is light, with the interactions with Ryan's and Jason's respective families probably being the parts that had me smiling because of how protective and nosy they were when it came to the men's private lives. This had more of a happy-for-now ending than a happily-ever-after one, but considering how long they had been together by the end, I feel it was more real. I'm giving Dating Ryan Alback four out of five stars. ♥