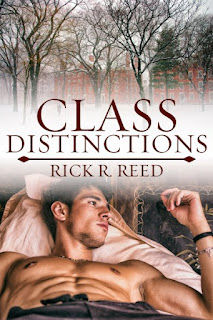 
Rick R. Reed's latest release is a new adult (NA) novella entitled Class Distinctions, which was originally released in 2011 and now has a new publisher. I've never read the first edition, so I won't be able to tell you if there are any differences between the two and if any changes were made. What I can tell you is that this was a really quick read and it's about Jonathan and Kyle, a couple who started out as the best of friends and soon became more. Months into their relationship, Jonathan's excited to have a three-day weekend with Kyle, and he's made all the necessary preparations with touches of romance. However, his well-laid out plans go awry when Kyle shows up and makes a shocking announcement: they're months-long relationship was over. Kyle walks away from what Jonathan believed was something meant for eternity, but will Jonathan give up without a fight and simply let go of the guy he loves?

This story begins with a break-up but readers do get to see how their romance began through flashbacks. We also find out what Kyle's reasons behind his decision to end things were, and while it may seem like something that could've been settled with a good amount of open and honest communication, it's also a touchy subject for many. Both Jonathan and Kyle were barely adults, so I get why Kyle felt his only choice was to break up with his boyfriend. Most of the story has the two main characters apart, contemplating how their relationship had reached the point that it did. We get to know Kyle more than we do Jonathan, but I guess that has to do more with the fact that it's Kyle who has an issue and not Jonathan. Based on the title alone, it'll be pretty easy to figure out what's really going on, but if you're looking for a mildly angsty and fairly clean read, Class Distinctions is a 3.5-starred possibility. ♥