Review: After You by Stephanie Rose (Second Chances #3) 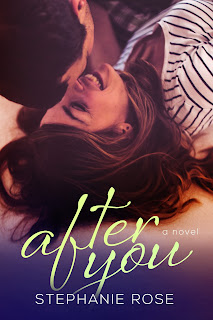 
This book... This series... Gah! Had I known I was going to need tissues all throughout, I would have made sure I had a newly opened box within reach. I loved the two novels and the novella that came first, but After You was just so extraordinarily special. Author Stephanie Rose didn't merely tug on my heartstrings; she yanked on them, making sure that my emotions got a workout while reading this beautiful love story between widow, single mother, and kindergarten teacher Ella-May "Ellie" Taylor and firefighter and Tiger Scouts den leader Nicholas Patrick "Nick" Garcia. But this tale of finding true love a second time after losing the person you thought you'd spend the rest of your life with wasn't just about feelings. Ellie and Nick and their circumstances gave me something to think about, and I contemplated what I would do had I been in their shoes and if I would have the courage to fight for our love.

It's been six years since Ellie Taylor said goodbye to her beloved husband Jack. She still mourns him, unable to really see herself with any man other than the son that bore his father's name. When her path crosses with that of Nick Garcia's, she can't help but remember the connection they had made five years prior at the wedding of her and Jack's best friends. Nick isn't just good-looking; he's a genuinely nice guy who takes the time to be present in her son's life. He's accepted that Ellie isn't ready to be anything more than friends with him, but flirting isn't totally off the table. When the temptation that is Ellie becomes too much for Nick to resist, they ease their way into an unexpected relationship. The last thing that Ellie ever expected was to find someone new she wanted to share her life with, but is she fully prepared to let go of the life she had with Jack in order to plan a life and family with Nick?

Losing someone significant in your life is one of life's greatest trials, all the more trying to go on with your life after experiencing said loss. It's not as if you can just shrug it off and pretend like it never happened or that it was nothing more than just a blip. How do you move on? Ellie's story is both moving and inspiring and reminds us that you can't dictate upon someone how long they should mourn someone and when and how they should move forward with their lives. We all deal with loss our own ways and that's something that simply needs to be respected. Ellie met Nick that first time and even though the attraction was there, she made the conscious choice to not pursue it by turning down his invitation. It took five years and way more than one interaction for her to even feel comfortable about how she was reacting towards Nick and embracing the idea of dating and being with him.

This was slow burn romance at its best. It isn't just drawn out for the sake of making this a much longer read than necessary. Ellie and Nick have speed bumps on their way to their happily-ever-after and I'm just glad to have been along for the ride because it was so damn worth the time I put into it and the tissues I wadded up and threw into the trash bin. My heart squeezed tightly in my chest when Nick was handed something from Jack and the contents of those two things were just...gah! I still don't have the right words to describe how those words from beyond made me feel. It would be so easy to look at Ellie's life and think of how sad it was that she lost her husband too soon. However, we can choose to see it from a different perspective; Ellie was blessed because she loved fully and truly twice and had that love reciprocated without fail. After You is a book you simply NEED to read. Five-plus stars. ♥

Purchase After You on Amazon.