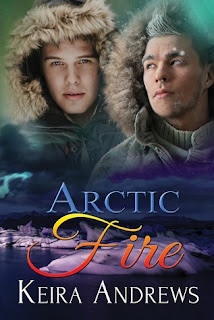 Thirty-six-year-old Captain Jack Turner's new assignment in the Arctic Bay is as far from his last one in the deserts of Afghanistan. But his time in the sandbox left him with scars, both the ones that can be seen and those that are etched deeply into his heart and mind. His superior thinks that working with the Ranger reservists will bring a spark back in Jack's soul instead of sitting idly by every single day in front of a desk in Ottawa. From the minute Jack meets Kinguyakkii Carsen, who, at thirty-three, is considered young to be a Sergeant, puts his foot in his mouth and it stays stuck there during their first encounter. Jack may not have been enthused to be in the area, but he wants to prove to Kin that he meant no offense and that he doesn't want to dial it in during his stay there. When they go on patrol together, Kin wonders if there's more to Jack than his initial assessment of being a jerk, and Jack begins to see that that there's much more to the Arctic Bay than meets the eye. Both men may happen to be gay, but neither one can be sure of the other's sexuality or if they're even interested. Once they're sure, however, the heat they unleash between them could melt the frozen tundra, but will they be able to share their secrets with each other?

Arctic Fire is the latest standalone novella from Keira Andrews and while it may have been less than a hundred pages in terms of length, this certainly didn't feel like a short read. What do I mean by that? The author put together a complete story, one that may not necessarily end in the typical happily-ever-after--it was more of a happily-for-now--but I love the hopeful tone, not just in terms of the personal aspect of the main characters' relationship but their professional connection and how it affects the local community as well. Their first meeting was memorable for all the wrong reasons, but I liked that Jack had to prove to Kin that he wasn't this uninspired man and uninspiring soldier. The tension between Jack and Kin was below the surface but always seemed to be simmering, ready to boil over once one or both of them acknowledged its existence and that it was more than a tension borne of frustration and misunderstanding. This book was a far more substantial read than a number of full-length novels I've come across, and it's so different from the other Keira Andrews novel I read several weeks ago, which has me even more eager to read more of her books. Arctic Fire is a highly recommended five-star read. ♥