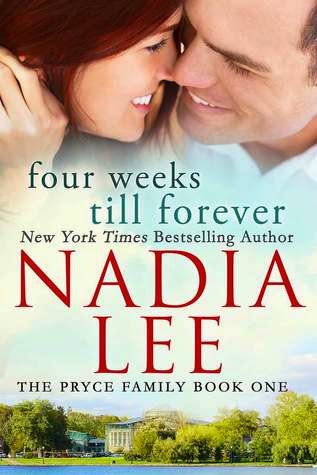 Four Weeks Till Forever by Nadia Lee is the first book in The Pryce Family series, a spin-off of her highly successful Hearts on the Line series. This is my first Nadia Lee book and while it may have been a spin-off of an already established series, it read pretty well as a standalone. Still, based on my track record, I'm already tempted to read the books that came before this one just so I have a better idea of what was going on with everyone else mentioned in this book. ^.^

Hilary Rosenberg is a highly dedicated and efficient executive assistant to one of the most successful men in the country. She's worked hard to get to this point in her life, yet she can never seem to escape the shadow of her family's reputation. She doesn't want to be a "Rosenberg girl" because she wants to believe she's so much more than what her late mother was and what her aunt and cousin are. Something else she doesn't want to become is a "quarterly girl" but she finds it difficult to say "no" to her boss' best friend.

Mark Pryce is a billionaire restaurateur and he didn't become that way by simply relying on his family's fame and fortune. He also happens to be something of a playboy, with his girlfriends being labeled "quarterly girls" because they never seem to last more than three months. When his mother insists he attend their Fourth of July family gathering to meet the latest woman she has lined up as a potential future wife, Mark decides to ask the one woman he's had his eye on to come along as his "girlfriend".

Hilary doesn't fit into the mold of women Mark has been known to date so she doesn't understand why he's chosen her to become his fake girlfriend. Her insecurities often get the better of her and she has people like her cousin, Mark's mother, and Mark's ex reminding her of who they think she is and why she's out of Mark's league. Both Mark and Hilary have pasts that they wish they could change but being together may be the chance they both need in order to have a happier and better future.

This was a good read even though there were moments that I wanted Hilary to realize that she truly is this beautiful and intelligent woman who deserves to be with someone like Mark faster than what was happening in the book. Hahaha! I liked Mark, who seemed so sure of himself as a successful businessman but had his own demons when it came to his personal life. I loved that he noticed Hilary long before he asked her to attend the family gathering with him. Both he and Hilary were great together and seemed to have real chemistry as a couple.

Four Weeks Till Forever is a sweet romance to curl up with and I'm looking forward to seeing what else is in store for the rest of the Pryce family in the future releases. I'm giving this first book four out of five stars and would happily recommend it to anyone wanting to read about two people who are so perfect for each other even when the rest of the world thinks they're not and how they finally decide to fight for what they want and what they do to get it. ♥

FYI: This book is also entitled The Billionaire's Counterfeit Girlfriend on some e-retailers.

Grab a copy of Four Weeks Till Forever and Ms. Lee's other books on Amazon | Barnes & Noble.