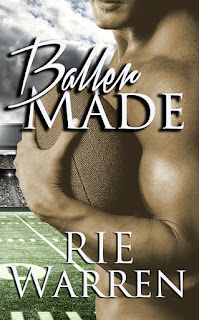 “Where have you been?” I murmured.

“Right here all these years.” His large hand smoothed a tendril of hair from my forehead. “I just didn’t think I deserved you.”

His eyes dropped, and he withdrew his hand. “Were you . . . were you thinking about him?”


Why, oh why do series that I like end much sooner than I expect them to?! Or heck, why do they have to end at all? I know, I know. They say all good things have to come to an end, and if you're going to call it quits on something, you may as well go out with a bang, and wham, bam, thank you, Rie Warren, because Baller Made was a bang worth savoring. Not only do readers get a heartrending story about a football star coming back from the self-imposed prison he wallowed in hoping to prove to those who continue to believe in him that he's worthy of their love and faith, but fans of the Bad Boy Ballers receive the kind of series ending guaranteed to leave them satisfied.

It's been more than two years since twenty-eight-year-old Calder Malone last saw the twenty-seven-year-old woman who has owned his heart for far longer than he'd ever admit. The guilt and grief that strums through his veins aren't anything new, not when it comes to his Regina, affectionately nicknamed Reggie. She's the woman he wants--and needs--but someone else claimed her when they were just teenagers and now, even if he wanted to lay claim over her, he can't...or so he believes. Because if Reggie gave him his space and to maintain radio silence for two years, she's done. She wants Calder to see that it's okay to let go and embrace life again...maybe one with her.

You see that brief synopsis I just wrote? Well, there's a lot more that goes on in the story that I didn't even hint at. If I had to go into the book not knowing what lay waiting for me, then neither should you. Don't worry, it isn't anything terrible. Hell, you're getting a fantastic story, but that's all I'm saying as far as that's concerned. Add to that all those players from the Carolina Crush and other peripheral characters that captured our hearts. Let's not forget that there's more than a sneak peek as to how far the first two couples--Rafe and Peyton MacIntyre and Brooklyn Holt and Delaney Jones--have come plus the lives almost everyone will be leading in the very near future.

Four books in and Rie Warren has yet to disappoint me. Her writing is always on-point and she knows how to balance the sweet and spicy parts of a romance that her readers demand. I love that she never scrimped on the sports aspect of this sports romance series of hers, something that other authors have, unfortunately, done before. We're reminded that the men are part of a football team, but it's a team that's clearly family, and the fact that this team embraces the women these three men we've gotten to know over three novels have fallen for makes me adore them even more. I'm sad for potential Bad Boy Ballers, but Baller Made ended it all on a five-plus-star note. ♥

Read my reviews for the Bad Boy Ballers series:

Baller Made (book three) - five-plus stars - My Review (posted above)

Purchase Baller Made on Amazon.