Review: Found Underneath by K.L. Kreig (Finding Me #2) 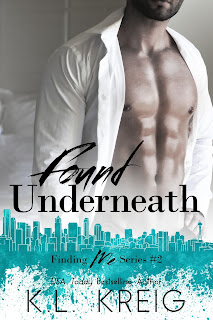 Picking up where Lost in Between left off, Found Underneath is the conclusion of Shaw Mercer and Willow Blackwell's unconventional romance. K.L. Kreig's Finding Me duology reaches Shaw put together a plan he believed was foolproof and would get the results everyone wanted and would benefit from. He would be the reformed playboy who's found the woman for him. Now, wouldn't that play well for the media and the public who were contemplating whether they should elect Shaw's father or not? But Willow wasn't quite the escort he was expecting her to be. She was so much more and she turned his plan--and his life--topsy-turvy. Just when they had decided to take what was a farce of a "relationship" and make it into something real, Willow's past comes a-calling, and it's a past that shockingly intertwines...with Shaw's. Just when Shaw's found his future, could their past end up destroying any chance for to have that future together? Two families, two lives, two hearts--will any of it survive?

Author K.L. Kreig leveled up with this second novel in her Finding Me duet, making sure to give readers something worth reading. Same as the review I gave the first book, I'm refraining from writing any details about the story because come on, that's why you're supposed to read it! Suffice it to say that I was glad with how everything played out in book two. The development of the characters and the pacing of the story seemed more on-point and definitely satisfied me in a way its predecessor faltered at times. I really liked Shaw and could see how much he had grown as a main character from book one to book two. Now, as far as Willow was concerned, well, there were definitely moments that my frustration with her were at a high, but she was nonetheless an intriguing heroine. Together, they were difficult to turn away from. Dare I hope that one particular supporting who had my attention as well--aka Noah Wilder--will be getting his own story soon? Please? I'm seriously willing to wait, so no rush, K.L. Kreig. I'm giving Found Underneath five stars and the Finding Me duology an average rating of 4.5 out of five stars. ♥

Read my reviews for the Finding Me series:

Lost in Between (book one) - four stars - My Review

Found Underneath (book two) - five stars - My Review (posted above)