Review: Thank You for Holding by Julia Kent & Elisa Reed (On Hold #2) 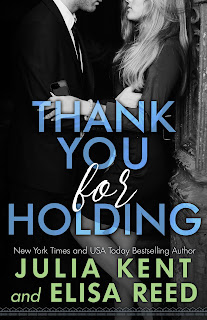 Carrie is vulnerable. She feels broken. Jamey dumped her in the worst possible way — and now I really hate Jamey.

But he’s given me an in.

A guy like Zeke would scoop Carrie in his arms and within half an hour be buried balls deep in her, taking advantage of her misery and heartbreak, using it to get into her pants, have her moaning under him, bare breasts shaking as he comforted her until Reverse Cowgirl became a form of revenge.

I am not that guy.

Why can’t I be that guy?

Thank You for Holding is the second novel in the romantic comedy series from the writing duo of Julia Kent and Elisa Reed entitled On Hold. If you've read the first book, Our Options Have Changed, you'll remember thirty-four-year-old Carrie Shelton and twenty-seven-year-old Ryan Donovan. Yup, these two are the main characters of this friends-to-lovers rom-com with the fake boyfriend angle thrown in, which, in their case, opens the door for one to realize just how amazing the other one is and has the other fulfilling a few fantasies over the person they've been pining for. You see, Ryan's had a thing for his best friend from the moment they met at O Spa. Carrie though was already with her boyfriend and had no clue that Ryan was crushing on her. In her head, all was well--she had a boyfriend she loved and who loved her back, a job she enjoyed doing, a family that supported her, and a best friend who happened to be the hottest guy working at the spa and who genuinely cared about her. But what happens when your boyfriend confesses to being gay weeks away from the wedding you're both supposed to attend? Well, get your best friend to pretend to be your new boyfriend, of course! That's what friends are for and all that cliched jazz. Excellent plan, wouldn't you say? No one's going to get hurt. After all, none of it is real...right?

Okay, I'm sorry, but Ryan had me from the moment he strutted out in his thong in the first book. And now that I find out what an amazing guy he is behind the skimpy underwear he dons for work? Gah! The man is why the term "le sigh" was created, me thinks. Yes, he has no qualms of using his naughty bits to drum up business for O Spa, but he's truly a nice guy and it's so damn obvious he's in love with Carrie. Speaking of Carrie--ARGH! It took her for-frickin'-ever to realize what she had right in front of her! Though I do understand that she never even contemplated that Ryan would have feelings of a romantic nature, not when she thinks of him as off the charts on the hotness scale and she was simmering at best. Insecurities are an evil thing, especially when they mess with your love life. But goodness, how I adored these two! While it's true that the whole friends-to-lovers trope can get tiresome and the fake boyfriend bit has been used and abused, but Julia Kent and Elisa Reed combining the two gave it a fresh feel. Think about it: asking your best friend to be your fake boyfriend should be a no-risk deal. But then there was the whole not knowing about secret feelings thing. This was sweet and sexy, left me in stitches, and made me a bit swoony. Okay, super swoony. You'll thank me for suggesting Thank You for Holding. Five-plus stars! ♥

Read my reviews for the On Hold series:

Our Options Have Changed (book one) - five-plus stars - My Review

Purchase Thank You for Holding on Amazon | B&N | iBooks | Kobo.