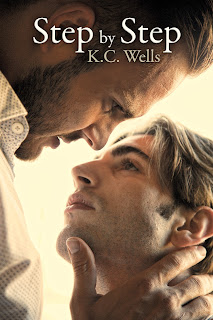 Step by Step is the latest novel from author K.C. Wells and is a May-December M/M romance between an incoming law student at the end of his rope and and hope coming in the form of a wealthy stranger. Twenty-year-old Jamie Stevens is about to get kicked out of his apartment and has no idea where he's going to get the money he needs to pay for his tuition. His dream of going to law school may be put on hold for an undetermined period of time if he doesn't get the funds he needs. When a bearded man in a leather jacket offers him, not just a place to stay but money for his education and necessities, Jamie is both surprised and wary. Why would someone like thirty-eight-year-old Guy Bass do something like this for someone he doesn't know? But you see, Guy is simply paying it forward, and soon they're not just housemates but friends as well. However, once Jamie's curiosity leads him to paying closer attention to Guy, could they end up crossing the line and take a chance on being more than friends?

This is one of those books that leave me torn. For the first half, I found myself suspicious and unsure as to what was motivating these two men to become entangled in each other's lives. It's easy to say that Guy was doing it out of the goodness of his heart, especially since he had been a recipient of such a kindness in the past. Then there's Jamie who easily accepts the offer after knowing Guy for a few hours. Maybe it was because Guy admits to thinking that Jamie was gay and that he was looking for a companion. So, I was reading their story in a state of wary disbelief. Cynical me had the whole gay benefactor scenario spinning in my head, although by the second half of the story, I did slowly see that maybe these two did have a connection and that it wasn't merely about the getting a companion in exchange for money thing. In short, they won me over, and by the end of it all, I was happy that Guy and Jamie were getting the ending they deserved because they did turn out to be genuinely good people.

As far as the story goes, there were a couple of things that were left unresolved--Guy's estranged relationship with his son and District Attorney Cole Daniels's secret case. I'm actually more curious about the latter, so I'm hoping that K.C. Wells has Cole's story slated sometime in the future. I also wouldn't mind learning more about Ryan, Jamie's best friend, and also John, one of Guy's closest friends. Yes, yes, I'm kinda-sorta-maybe hinting that I hope Guy and Jamie's story was the beginning of a series, and I have no qualms about putting it out there. I'd also like to give the author props on including the movie Shelter, which I've watched more times than I'd care to admit lest I come off as being an overly obsessed fan of the film. If you haven't seen it yet, I'm highly recommending you find a way to rectify that situation as soon as possible. So, while the first half of the book had me waffling even as I tried to suspend my cynicism, I did end up liking the second half, which leads me to giving Step by Step four of five stars. ♥