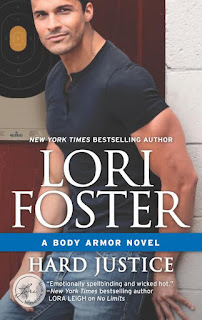 Bestselling author Lori Foster's new romantic suspense series, Body Armor, got off to an impressive beginning with Under Pressure, introducing readers to a group of bodyguards led by their female boss. With the follow-up novel, Hard Justice, Foster's taken things up a notch, and goodness, it's even better than the series starter! If you read book one, you should remember thirty-year-old Justice Wallington, who we find it out has a rather, umm, unexpected real first name. I actually snort-laughed a teeny, tiny bit when I read it. The former MMA fighter turned professional bodyguard's latest assignment is twenty-four-year-old heiress and decorator Fallon Wade, the only daughter of hoteliers and a young woman who's led a sheltered life, no thanks to her parents' very protective nature. She accepts their decision that she needs a bodyguard, but Justice is nothing like the other bodyguards who have come and gone. Fallon isn't what Justice expects either, having pegged her as a spoiled princess who turns out to be far more innocent than he would have ever expected. There doesn't seem to be any threat against Fallon, but pretty soon, threats arise. Can Justice protect her without getting his growing feelings for her involved?

I adored Justice and Fallon! Their story could have been limited to them being the buff, rough-and-tumble MMA fighter who becomes her bodyguard and the pampered, naive heiress who fall for each other--you know, the usual opposites attract romance--but Lori Foster steadily kept her foot on the gas and took the story in a different direction to place her own stamp on it. In the beginning, it almost seems as if it's nothing more than overly protective parents who can't hover over their daughter everywhere she goes so they go ahead and get her a bodyguard. But see, Foster lures you into that sense of complacency before she starts dropping hints that there may be more than meets the eye lurking in the shadows. I had one person pegged as my prime suspect for a good portion of the story until I start to wonder about someone else. Was I right either way? Nope. The bad guy threw me for a loop, but who am I to complain? Heck, I like it when an author manages to pull the wool over my eyes. Hindsight affords me the ability to look back on everything that happened and I couldn't help but be impressed with how it all came together and how there were actually a couple of clues subtly thrown into this fantastic story.

Justice and Fallon are mostly opposites, save for the fact that they both come from loving and supportive families. With Justice, Fallon isn't just protected, she's able to spread her wings more than she's ever done so in the past. She also learns things about herself and what she's capable of doing. Don't think, though, that Justice doesn't learn a thing or two from his girl. He's transitioning from one thing he enjoyed--and still misses--doing to something he's still getting the hang of but is clearly more than adept at, and when Fallon becomes his client, it's as if things make more sense, like they come into better focus for him. These two made me smile and I can happily say that neither one of them made me want to get all ragey due to idiotic missteps. Of course, Leese and Cat Phelps from Under Pressure as well as Justice and Leese's MMA friends from the Ultimate series make appearances, with the latter providing a bit of comic relief. There were a couple of connections from two particular pairs of side characters that I'm more than interested in seeing if and where they go should they be explored further as the series continues. I really need more Body Armor and Hard Justice has set the bar even higher with this fun and flirty five-starred read. ♥

Read my reviews for the Body Armor series: