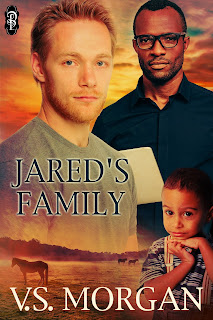 Jared's Family is the third novella in the V.S. Morgan-penned Men of Blackbird series and is the second M/M story. Twenty-seven-year-old Jared Malone's last relationship is one he wishes he could forget. His ex was verbally and mentally abusive and kept what they had a secret from everyone, leaving Jared to not realize the depths of his ex's deception until it was too late. His four brothers are the ones who've been by his side--they're his blood, his family. Then Jared meets Virgil Stevens and the man's three-year-old nephew Donovan, otherwise known as D. Having witnessed his mother's death has left D with limited communication and nightmares, and it's left Virge stepping in as his legal guardian and taking time off from his job as a cop in Los Angeles to attend to D's therapy in Montana. What started as a chance meeting quickly hints at the possibility of something more, but both Jared and Virge have secrets that could end whatever it is they're hoping to build upon. Will they be able to overcome push through all the obstacles before them and become the family that little D needs and the one they both want to have together?

This was a quick read and my third one from the author, having read the first two novellas in the series, with The Gift featuring eldest brother Wyatt and Sam's Temptation featuring second brother Sam, the former being an M/M story and the latter an M/F one. Jared is the Malone brother who's smack in the middle and was an easily likable main character and he and Virge seemed to have a fair amount of chemistry. While this is a novella, everything that happens between and to Jared and Virge spans over weeks and months. Yes, that means that it does jump forward every so often, skipping over non-consequential stuff (or at least I'm assuming they're non-consequential). There's a bit of suspense in the story, although the person behind all the shenanigans happening to the two men is pretty obvious since there's really only one character you can suspect. Virge and Rafael Inez--Wyatt's husband--knowing each other seemed a little too contrived. I also found it strange that the only suitable therapy available for D was so far away from California. Other than those things, Jared's Family was a pretty good, 3.5-starred novella. ♥