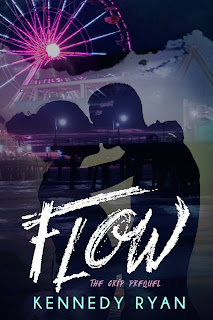 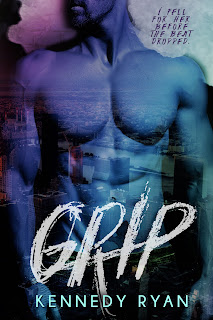 Note: These ARCs were provided by the author via L. Woods PR in exchange for an honest review.

He tilts his head, his eyes so warm as he looks at me. "You're everything I wanted before I even knew what I was getting."

I kiss him thoroughly, deeply, surrendering everything before pulling back to smile down at his contented expression.

"You wanted me, you got me." I kiss him one more time, branding him mine as surely as I'm branded his. "Be careful what you wish for."

These books should have come with a major book hangover warning because it's been a couple of days since I finished reading them and I've still got Grip and Bristol stuck in my head and their story lodged in my heart. My original plan was to read Flow, which is the prequel novella, before its release date, and then reading Grip, the full-length novel, closer to its own release. That plan, of course, was thrown out the window once I had finished reading the prequel. I needed to find out what was going to happen to Marlon "Grip" James and Bristol Gray then and there, so yeah, I read almost five hundred pages of this advanced reader copy in one sitting. It was THAT good.

This review is a consolidated one, covering both the prequel and the book that follows it. I thought it would work out better that way since they're connected and because my thoughts and feelings for both titles are intertwined. Going into these books, I had no clue they were the spin-off of author Kennedy Ryan's much lauded and loved Soul series. While I did find myself quite curious about Rhyson Gray, Bristol's twin brother and Grip's best friend, and his wife Kai, I was able to enjoy Flow and Grip and I feel that you can read them independently of the three books that cover the original series. Now, of course, I've added those three Soul novels on my must-read-ASAP list.

In Flow, Grip picks up his best friend's twin sister from the airport--the same sister that Rhyson hasn't seen in the five years since he went to court to be emancipated from their parents--and they immediately notice one another in ways they don't think Rhyson would exactly be thrilled over. Grip and Bristol as different as two people could get anyway; them having anything more than a budding friendship wouldn't make much sense. Except it's those inexplicable moments in our lives that become milestones, and what happens between Grip and Bristol will become the touchstone of every other person that tries to become that significant someone but never coming close. This introduction to their story had me fully engaged and by the time I was done, I needed so much more because I couldn't get enough of them, and this was me NOT knowing anything about them from the Soul trilogy.

After a brief look at what happens after Bristol leaves Los Angeles for New York, going from the immediate aftermath to Bristol's graduation from college two years after that, Grip fast-forwards six years later and finds Grip on the brink of releasing his first album as a performer, already having worked with other artists in the past. His manager is none other than Bristol, the one woman he's always wanted but who has kept him at arm's length. Grip's patiently waited for eight years for Bristol to acknowledge that what happened between them those few days she was in LA. With Grip reaching the point of choosing to keep holding on or letting go, Bristol's going to have to decide if she wants to continue trying to convince herself that she and Grip are nothing more than friends or if she's finally ready to claim what they've wanted for years. But when they do decide to give a committed relationship a try, how will they fare against the barrage of naysayers who think they should never have gotten together in the first place? Will Grip and Bristol listen to the dictates of society or to the demands of their hearts?

You know how people say that something is "everything"? Well, that's what this book was to me in the nearly four hours it took me to read it. It was so much more than a love story. It gave me goosebumps because its relevance in today's turbulent times gives you something to ponder on. Grip is black and Bristol is white. He grew up poor and she grew up wanting for nothing materially. But Grip never wondered if his mother loved him; he simply knew. On the other hand, Bristol never felt like she was at par with her twin brother who had their parents' attention because of his being a music prodigy from the time he was a child. So, do you allow those differences to get in the way of your relationship? More often than not, ignoring them is easier said than done, especially when you have important people in your life, i.e. family, who have no qualms about telling you how you're wrong to even want to be with someone who isn't "like" you. But I loved how Grip and Bristol stood their ground once they made the choice to be together. These two seriously made me believe how the power of true love can overcome prejudice.

Prior to reading Flow and Grip, I had never read any other Kennedy Ryan-penned books, so it says something when I read a novella and can't help but get started on the novel that follows it, even if it happens to be the very wee hours of the morning. This wasn't a matter of me saying, "Just one more chapter." Nope. I was in it for the long haul and nothing, not even the fact that my neighborhood was waking up to start a new day and I was still lying in bed with my e-reader totally invested in the fictional story of two fictional characters. And afterwards? I'm still hung up on it all. Kennedy Ryan's gift, not just for creating a beautifully inspiring and moving love story but for fantastic poetry, demands attention and I'm glad that I finally--FINALLY!--got to experience it for myself. It's only the first quarter of the year, but these books are already on my list of top favorites. I'm seriously--and as nicely as possible without having to literally hold your finger down and one-click--recommending you read these books...like today and in order. I'm giving Flow five-plus stars and Grip five-plus stars, too. Multiplied by a hundred. Twice over. ♥