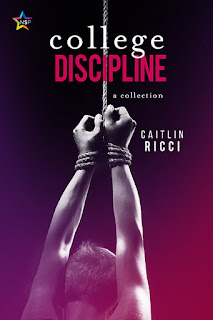 Note: This ARC was provided by NineStar Press via IndiGo Marketing & Design in exchange for an honest review.

Story number two is Leo's Grand Plan and has nineteen-year-old Leo wanting to celebrate his birthday with anonymous, kinky sex, except rather than hook-up with a stranger, he ends up with his father's boss who's in his fifties. I liked the illicit feel this story had and how Leo decided to go after what he wanted, and that was more time with Donovan. I'd have to say that this was my favorite among all four stories.

Hitachi's New Assignment is the third in the collection was about a police officer named Hitachi who's tasked to drive Gabriel, who's the son of a wealthy and powerful man. Soon enough, the two are engaging in rough sex and talking about more afterwards. The sex was hot, but I didn't really feel like there was an honest-to-goodness connection between Hitachi (whose name had me thinking about the electronics company) and Donovan.

Last but not the least was Timothy's First Rodeo, which had former high school football star Timothy returning to this hometown and not receiving the warmest of welcomes until he's rescued by Adam, who turns out to be his mom's friend and the town sheriff. Again, they go from having sex to Adam wanting a relationship and Timothy waffling. I liked that they clicked together--at least in my head they did--but yeah, it was like Timothy was pressured by Adam for more than he was initially willing to give.

All four of the stories had steamy sex scenes, but I would call any of them "love stories" or even "romances". What happened between the four couples was based on lust and even though there may have been insertions regarding entering a relationship in all four cases, I just didn't get the vibe that it was about love. The shift from BDSM-type sex to discussions about commitment and the like was often abrupt, and seemed so out of place. If I were rating this based on the sex alone, I'd get a five, but of course, I'm taking everything into consideration so College Discipline merits three stars. ♥