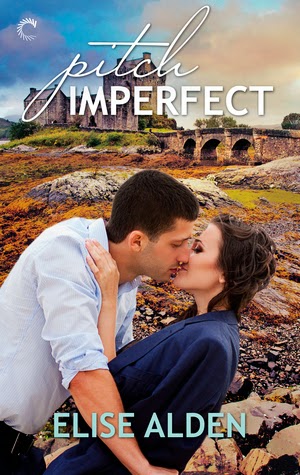 Pitch Imperfect is a standalone contemporary romance novel from Elise Alden and is about two people who were once very much in love and engaged to be married...until the bride leaves her groom waiting at the altar. Will eight years apart be enough for them to work together on something they both have fond memories of or is the pain of abandonment and betrayal still too much to overcome?

Anjuli Carver loved Rob Douglas enough to say "yes" to his marriage proposal but decided to jilt him on the day of their wedding to pursue her dream of becoming a singer. She achieved fame and fortune only to find herself, eight years later, nearly out of both and carrying a burden that made her give up her true passion--singing. With a dilapidated manor desperately needing to be renovated, Anjuli knows that the only person who can help her is the same one whose heart she broke eight years ago.

Rob Douglas has never really forgiven Anjuli Carver for what she did to him eight years ago. When he sees her again in London, they have a one-night stand that meant something to him but she tells him it was nothing more than a random romp for her. When she asks him to renovate the very same manor that he was trying to buy, he agrees but he plans on making her feel exactly how he did that night in London.

There's a lot that goes on in this book. Rob and Anjuli are each keeping their own share of secrets. Even after eight years and the fact that Rob never replied to any of Anjuli's letters or that Anjuli abandoned him on their wedding day, these two inexplicably still have feelings of love and lust for each other. Then you've got supporting characters who have their own issues and drag the lead characters into them. Sheesh. I'm all for subplots but when it gets to the point that they begin to interfere with the flow of the overall story then I say they should have gone through a "pick and choose" phase.

Anjuli and Rob were okay lead characters but I didn't really feel a consistent flow of chemistry between the two of them. There were moments that the love seemed genuine but there were also times that it felt forced. All the secrecy also got to me. Anjuli already had secrets of her own and then her sister imposes upon her one secret and then she decides to take on another one courtesy of what happened between her and her best friend. The woman never learns. *SMH*

I think the book could have been better had it stayed focused on the main plot and not thrown in all the other stuff just to create more conflict. The situation between Anjuli and Rob was already complicated enough without everything else going on. The ending was good and did leave me satisfied with how everything was wrapped up. I'm giving Pitch Imperfect three stars. ♥

Grab a copy of Pitch Imperfect and Ms. Alden's other books on Amazon | Barnes & Noble.