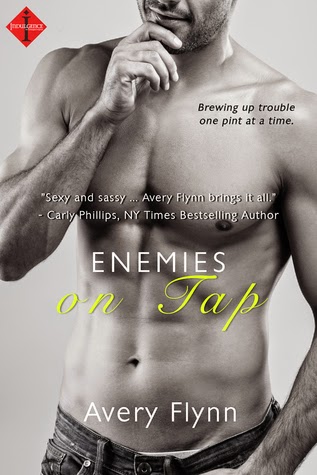 Enemies on Tap is the first book in the Sweet Salvation Brewery series by author Avery Flynn and follows the stories of triplets who try to save a family-owned brewery left to them by their late uncle and want to prove that they are more than the negative reputation their family has had to live with for generations. The first book focuses on the oldest of the three sisters and is a second chance romance she shares with the one guy she once thought saw beyond her last name only to have him unable to defend her when she needed him most.

When Miranda Sweet left Salvation, Virginia after high school graduation, she never thought she would have to return to the town that had nothing good to say about her or her family or have to face the townsfolk who had nothing better to do but gossip about her and her kin. However, when her Uncle Julian leaves the Sweet Salvation Brewery to her and her sisters, she decides this may be the opportunity to prove to her employer that she can turn the failing business around and sell it for profit. What she doesn't count on is coming face to face with Logan Martin, the guy she fell in love with in high school but who proved to turn a blind eye and deaf ear when rumors about her ran rampant after they slept together.

Logan Martin is now at the helm of the very bank that Miranda has no choice but to go to in order to apply for a loan. Such is life in a small town but Logan has no intention of giving her the help he needs because he wants the land the Sweet Salvation Brewery is on to push through with plans for Martin Park. However, the attraction that he and Miranda once shared is still very much alive and their feelings for one another seem to be waiting to be ignited just below the surface. He's torn between listening to the people around him pressuring him to push Miranda out of the brewery and their town and finally listening to his own heart and standing by the girl he let go of once already.

This was a good second chance romance that had two characters who had some definite history between them even though that history wasn't played up as much as I would have expected. While the past is discussed and you can tell that it plays some part in why Miranda acts the way that she does towards Logan, the focus of the story really is on their present and whether or not there's hope for them and realizing what it is they truly want for themselves and from each other. The story itself was interesting because of the whole brewery backdrop, which was something new and different from the usual stuff I've encountered in other books.  ^.^ Enemies on Tap was an enjoyable read and it gets four stars. ♥

Grab a copy of Enemies on Tap and Ms. Flynn's other books on Amazon | Barnes & Noble.