Review: Where I Need to Be by Jamie Hollins (McKenna #3) 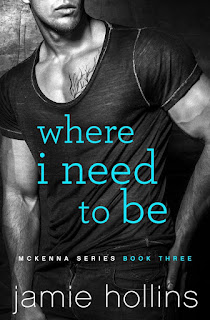 Note: This ARC was provided by Weapenry Co-Op via NetGalley in exchange for an honest review.

Where I Need to Be is the third and newest addition to Jamie Hollins's McKenna series and tells the story of Megan McKenna and James Foley, two individuals who are more familiar with heartbreak than they care to admit. James solitary focus is being there for his son, followed closely by making sure his garage brings in a profit. Everything else comes last, and that includes any sort of relationship with a woman. While he's drawn to Megan, he knows he needs to be upfront with his lack of desire for a committed relationship, even if he ends up looking like an insensitive jerk in the process. To his surprise, the newly divorced Ms. Mckenna--and former Mrs. Dempsey--is more than up for James's plan to keep things casual. Everyone wins, right? But with James and Megan spending more and more time together, what once was meant to be nothing more than casual begins to feel like far more...

Just like the two books before it, The Best Part of Me and Not in My Wildest Dreams, this latest release in the McKenna series satisfied the romance reader in me. Megan and James's story has some angst mixed in with lighthearted moments. Megan is James's son's teacher and James becomes Megan's mechanic when her less than stellar, not-so-new automobile becomes far more trouble than it was ever worth (which wasn't much). They click and not just sexually either, which is how their relationship begins. I appreciated Megan not being this overly clingy female who was feeling all kinds of hurt when James was honest about not wanting anything more than sex and maybe some companionship. She's learning to be far more independent than she ever was before and is her own person and I liked that James put his son first each and every time. Four stars for series ender Where I Need to Be. ♥

Purchase Where I Need to Be on Amazon | B&N | iBooks | Kobo.