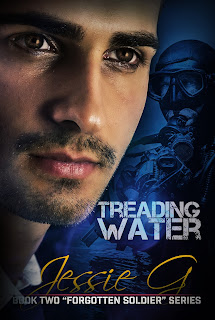 Treading Water is the second and newest addition to the Forgotten Soldier series from author Jessie G. and it's a much longer read than its predecessor, series starter Micah's Soldier. When Seaman Sean Murphy is injured in a freak accident while working on an aircraft carrier, his best friend and his closest cousin are brought together by the Ramos Foundation, led by Jared Ramos and ably assisted by Aiden (whose last name I don't recall being mentioned). Petty Officer First Class Shane Parker and Julian Brand will do anything in order to make sure that Sean has everything he needs in order to not just recover from his injuries, but also to truly begin living life to the fullest. But even as Sean needs them, Shane and Julian know that they'll also have to lean on one another. The two become friends and their attraction adds on certain benefits. Could they be destined for something permanent?

This was a uniquely written book, in that it wasn't just Shane and Julian's love story, but it was also a story of their connection to Sean and how their love for him unites the two of them. There's also Sean's own tale of recovery and finding his own happy ending, as well as an inkling of sorts as to the direction Jared's relationship with Aiden may be headed--from professional to personal. While there are a few years between the two of them--Shane is thirty-six and Julian is five years younger--and Julian is no longer in the military, both men knew all about what it's like to live in a way that's expected of them, what with Shane having experienced Don't Ask, Don't Tell (DADT), which had him hiding his sexuality, and Julian joining and staying in the military even though he was never cut out for it. Figuring the ins and outs of their relationship made for a good overall read. Four stars go to Treading Water. ♥