Review: The Taste of Her Words by Candace Knoebel 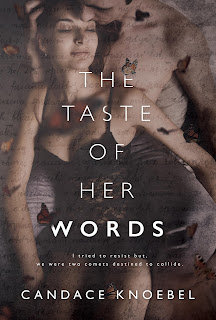 
All this time I’d been looking for guidance, looking for a ray of hope, and then he kissed me. He saw me. The real me. Not the mom. Not the woman who worked relentlessly night after night. He saw me, as I was in that moment. Not a fragment of who the world tried to make me out to be, but who I actually was, darkness and all.

And he liked it.

When she was twenty-five and the single mother of a five-year-old, Andrea Rose Hale kissed Dean Harley Thurston, her brother's nineteen-year-old best friend, in their old tree house. It was a kiss that made her world shift, a fact that had her distancing herself from the boy that made her heart flutter and wish for more. He's broken, but so is she, and while that kiss may have made Andy see Dean in a whole new light, it also proved that she wasn't ready for whatever may have been waiting for them beyond their lips meeting, that maybe her mind wasn't prepared for what her heart wanted and needed. They led separate lives, but she never forgot his kiss, and five years later, when Dean returns from New York, and while he may now be living in Knoxville, a couple of hours away from her in Knoxville, Tennessee suddenly feels smaller. The feelings are still there, and the more times their paths cross, the stronger those feelings become. They've both got baggage and their pasts have a bad habit of catching up to them when they least expect it. Can they ever live beyond memories written on paper to make their dreams come true?

Candace Knoebel is a new-to-me author and a quick glance at her list of previously and soon-to-be published work on Goodreads has me thinking that The Taste of Her Words is her first foray into contemporary romance as a solo author. Now, I'm just guessing here based on that Goodreads list. I've been known to be wrong, after all. But whether this really was her first contemporary romance, what I did realize after having finished this novel was that Knoebel is a talented writer indeed. Whether it be the story of Andy and Dean itself or the snippets of poetry that allow readers to have more insight to Andy's unspoken thoughts and emotions, Knoebel's words aroused reactions from me that made it rather clear how invested I had become in the main characters, as well as in ten-year-old Charlie, Andy's son. How could I not become invested in them, for goodness' sake?! After everything that they had gone through, whether it be together or apart, no one deserved a happily-ever-after more than these three did, and boy, did they earn it. The author's writing and the story itself paired with the cast made this one gem of a read.

My heart went out to Dean for what he went through when he was only sixteen and the treatment he got from his father as a result. He had a lot to lose if he did pursue anything with Andy then and now because not only was Josh, Andy's brother, his best friend, but John, Andy's father who also happened to be Dean's father's law partner, was the father figure Dean had in his life. Pair that with Andy's seemingly never-ending problems with her son's father who was abusive in more ways than one and obviously had something more than anger management as his issue, and you've got yourself a heavy read with more than its share of angst. But alongside the drama is a lot of romance and sex and an undeniable connection and nearly palpable chemistry between Dean and Andy. I do confess that there were a couple of times that I didn't really agree with how Andy handled the whole situation with her ex, but I understood why she felt she had to do what she did. Suffice it to say I'm wholly impressed with Candace Knoebel and The Taste of Her Words, which gets five-plus stars, and I'm curious what she has next for us. ♥

Purchase The Taste of Her Words on Amazon.