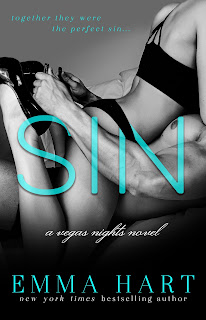 Vegas Nights is a spin-off series of the Stripped series, both of which are penned by bestselling author Emma Hart. This spin-off starts off with Sin and it's an enemies-to-lovers tale that pits twenty-five-year-old Dahlia Lloyd, book lover and owner of The Scarlet Letter, a bar that her father started as an ode of love to her mother and passed on to their daughter after his death, against thirty-year-old Damien Fox, CEO of Fox Enterprises, a company that he co-owns with tyrant of a father. He wants her bar, she has no intention of selling it to him. He sees her as a challenge, she doesn't bow down to anyone. Dahlia and Damien are setting up for a showdown, but it's one that could turn out to be very different from what each one may have expected. Is it a sin to fall for the person standing in the way of your dreams and ambitions, and if it is, was it always meant to feel the way it does--so absolutely life-changing?

I am so loving these Vegas-set stories that Emma Hart has given for all of us to swoon over. Stripped Bare and Stripped Down, the two books that made up the author's Stripped series, were romantic comedies, and while Sin still has devilishly wicked wit and humor that Hart has been known to inject into her stories, this was a heavier read, a lot of which was courtesy of Damien not having the kind of family life you would want to known by anyone outside of their clan. While he did come off as quite an ass in the first few chapters, there was denying that Damien was a character whose layers were just waiting to be peeled back, and once they were, goodness me, but how he proved he was so much more than a man who seemed to want to take over the world around him by any means necessary. There was a brokenness to him that made my heart squeeze in empathy for his all too quiet pain.

Dahlia is one of my favorite heroines so far this year. Damien may have thought her to be a pushover, but never judge a bookworm by her cover. She took a stand and nothing and no one was going to bulldoze their way down her defenses, not counting, of course, the defenses around her heart since there's a difference between her personal and professional lives. She gave Damien a run for his money--of which he had a lot of but again, Dahlia isn't the kind of woman that's motivated by that sort of thing. I loved the push and pull between these two. They had a lot of tension thrumming between the two of them, and I'm not just limiting that to the sexual kind. Alongside them, we're introduced to supporting characters who I definitely wouldn't mind getting to know more about as the series moves forward. The Vegas Nights series has gotten off to a fantastic, five-starred start with Sin. ♥