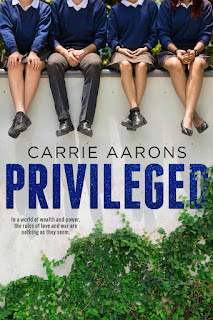 Privileged is the sixth Carrie Aarons novel that I've read and I swear, the woman can do no wrong. This is a mature young adult (YA) read that's mostly set in London and it's the story of eighteen-year-old Nora Randolph, who wants nothing more than to continue leading her ordinary life back home in Pennsylvania. But with her mother's engagement to a member of British royalty--and not just any regular member of the peerage either but third in line to the throne--Nora's life is about to change in ways she could never have imagined. Starting her final year at Winston Academy before going off to college has surrounded her with children of privilege, but it's one particular student who makes it clear that he doesn't think Nora belongs--Asher Frederick. He may have planned to keep his eye on the American girl, especially after knowing who her soon-to-be stepfather was, but while she was meant to be a mere pawn in his plans for revenge, he starts to see her in a different light. Asher cannot afford to have his plans derailed, but his feelings for Nora may leave him to choose between vengeance and the girl he's falling for.

When Asher first makes his presence known in this novel, he's every bit the epitome of the guy you'd love to hate. His behavior towards and treatment of Nora was deplorable, but there's also a lot going on behind his actions. I mentioned his need for revenge, and it isn't the shallow kind of "oh, you looked at me the wrong way" thing. The hatred Asher feels is deeply seated, but how he's gotten to this point is part of what makes this eighteen-year-old fascinating to get to know. Both Nora and Asher mature as main characters and their journey as a couple is one that you want to be privy to. The lines becomes so blurred for Asher because of his own long-held beliefs that have been drilled into him for so long and his now quickly developing feelings for the girl who was never meant to fall in love with. As I went from page to page and chapter to chapter, Carrie Aarons had me wondering what were truths and which were lies in the intricately weaved story of love and hate and everything in between. And that ending? Goodness, it was the icing on this wonderful cake, erm, book. Do yourselves a favor and read Privileged. Five stars. ♥