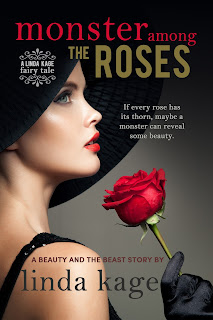 When an author decides to take on a classic fairy tale and make it their own, whether it by giving it a modern twist or adding their creative spin on it or both, I'm often curious to see what direction they'll take and whether it works out in the end or not. With the first novel in Linda Kage's Fairy Tale Quarter, she's taken on what I think is the favorite of many an author to tap for modernization--Beauty and the Beast, of which there are several different versions already, with French author Gabrielle-Suzanne Barbot de Villeneuve widely recognized as the original and Disney's animated and live action film adaptations possibly the most well-known. I've read several modern takes on this story, so I was curious when I heard Kage was starting her series off with it, and it was a good start at that.

So, did this have the same disfigured male main character and the female main character who loves and accepts him, scars and all? Nope, it did not, in the sense that she flipped them. Twenty-eight-year-old Shaw Hollander and twenty-five-year-old Isobel Nash did not exactly welcome each other with open arms when they first met. He was taken aback by her disfigurement and she did not like the idea of a stranger in any sort of proximity to her and her home. Just like in the classic fairy tale, Shaw and Isobel have to work to earn the other's trust, and in the process, they find friendship and love as well. Isobel has walls that have been fortified by years of rejection and people looking at her as if she were an abomination rather than a victim of unfortunate circumstances that not only damaged her but took her mother as well, thereby fragmenting their family and shattering each of their hearts.

I've enjoyed Linda Kage's writing in the past and the woman deserves kudos for taking a well-loved and very familiar story and making it her own to some degree. Shaw and Isobel have had their share of challenges, a lot of which they had to contend with on their own until they met each other and realized that they didn't have to be alone any longer. I liked both of main characters, but there were moments that they sounded younger than they actually were. The supporting characters are familiar caricatures of the more established ones in other versions of the story of Beauty and the Beast, but they do add their own unique texture to the overall love story of Shaw and Isobel. Monster Among the Roses provided a good, four-starred beginning to Linda Kage's all-new, promising series. ♥

Pre-order Monster Among the Roses on Amazon | B&N | iBooks | Kobo.