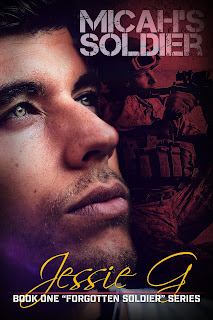 Note: This ebook was provided by the author via Enticing Journey Book Promotions in exchange for an honest review.

Originally intended to be part of anthology, Micah's Soldier is my first Jessie G. read and it kicks off the author's Forgotten Soldier series. Short but poignant, this quickie read is about Gunnery Sergeant Garrison Douglas and Micah Stills, both twenty-eight. Returning home from his final tour, Garrison takes in the civilian contingent greeting other veterans arriving in the airport. Many have families and friends welcoming them back, but Garrison has no one, having lost members of his family through the years and having ended his relationship with his boyfriend five years ago, knowing all too well that he would come back changed and not wanting Micah to have to live with the waiting and then having a war-ravaged man return instead of the one he saw off to enlistment eight years prior. He told Micah to leave him be, so why does Garrison wish he were there to welcome his soldier home?

For something so short, Micah's Soldier packs a punch in terms of strumming these heartstrings of mine, but not necessarily coming up with something that overtly panders to my emotions. The fact that Garrison and Micah are a former couple and that the manner in which their relationship ended was an abrupt and quick one is established early on. I liked that the author had both main characters clearly pining for each other, but still keeping their feelings in check until it was finally time for them to own up it all. I'm always impressed when a story with a limited number of words is able to convey the emotions that the author wants their readers to feel and to have them care about two people--fictional as they may be--in such a short amount of time. Heck, I read Micah's Soldier in less than fifteen minutes and that's all it took for me to truly like Garrison and Micah. This receives 4.5 out of five stars. ♥