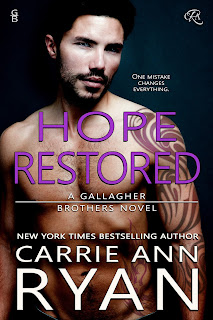 This is the third review in a row that has me saying goodbye to a series that I've grown fond of. Sigh. Over the span of three books, I've adored getting to know Graham, Owen, and Murphy Gallagher, who make up the Gallagher Brothers series. One other brother, Jake, already got his story told in Montgomery Ink, the original series that made Carrie Ann Ryan such a favorite with romance readers. Gallagher Brothers was my first ever Carrie Ann Ryan series read, so I have yet to get around to reading those books but hope to have time much later this year to finally check those of my never-ending to-be-read list. Still, I felt like I got to know Jake and the family he's created for himself by way of the stories that featured his three other brother more prominently. But I digress once again. Where was I? Ah yes, the final Gallagher brother gets his story told in Hope Restored, and it's a heartrending yet hopeful one.

The youngest in the brood, Murphy Gallagher knows all about the over-protectiveness his late parents and his older brothers have always had. But it isn't merely because he's the youngest one in their family. He's already been diagnosed twice with cancer and has beaten the disease both times. Now, he's just living his life, grateful that he's able to experience growing up and growing older, bearing witness to his brothers falling in love and having families of their own. Murphy, on the other hand, is happy to be a bachelor for an extended period of time. He isn't in any sort of rush. After all, he's got the rest of his life ahead of him. That is, until something from his past makes a return, and he's left with no other option but to face it. He's got his family to support him and his close friend, Tessa Stone. He has no plans to cross the line, not when her friendship means so much, but becoming roommates has them in close and constant proximity to one another. Maybe they'll work as friends with benefits...but it feels like...more. When Tessa's own past comes a-calling, will they be strong enough to face all that's coming for them?

I needed tissues while reading this series ender, especially at one particular point where Murphy and Tessa are hit with just how quickly someone or something can be taken from them without warning. That also leads me to hope--since the book is about hope and all--that one particular supporting character connected to said event will get their happily-ever-after, even if it's much, much later on. Back to Murphy and Tessa--I liked that there wasn't this mad rush for them to get "it" on. They both had a lot on their respective plates, though Murphy far more than Tessa, and while their attraction was obvious and undeniable, I'm glad that it's reiterated just how real their friendship is. These two are fun together, but they also realize how reliable the other is when the going gets tough, making for a far deeper connection. Without me saying it, I think it's easy to figure out what that thing from his past is, and it made for an emotional read. Hope Restored gets five stars and the Gallagher Brothers series gets an average of 4.5 stars out of five. These brothers proved that family prevails when love, passion, and hope endures. ♥

Read my reviews for the Gallagher Brothers series: