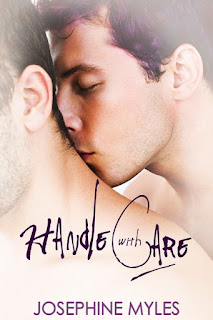 Originally released in 2012, Handle with Care is being re-released by the author as a self-published standalone and Josephine Myles yet again gives fans and readers a unique story of love, trust, and quirks. When their parents died, Benjamin Lethbridge took upon himself the responsibility to take care of his then-six-year-old sister Zoe at only eighteen. When he finally allowed himself to give into his own needs and wants, he paid for it dearly, now having to live with the ramifications of ignoring his diabetes and indulging in vices and debauchery for two years by dealing with in-home dialysis treatments. With his life now limited to what's allowed, Ben makes do with one particular addiction--porn. The fact that his buying sprees of porn DVDs mean the constant and regular deliveries by one equally addictive and adorably gorgeous, purple-haired, punk-looking guy named Ollie Jones is an added bonus. What's wrong with fantasizing over him, even if he is only twenty? After all, it's not as if Ollie'd ever fancy someone like Ben, right? They couldn't possibly have anything in common...or maybe all they need is one chance...

I totally adored Ben and Ollie and liked two supporting characters in particular, Zoe and Mrs. Felpersham, Ben's younger sister and elderly neighbor, respectively. These two would not have made sense if you had to list their attributes side-by-side, and there's no denying that the age difference does play a role in highlighting just how different they are in terms of temperament and maturity. However, these two do have quite a bit in common and I loved reading about how they discovered those things that they did share an affinity for as well as them realizing that the crush one had on the other was very much mutual. Aside from the May-September romance between the two main characters, I enjoyed reading about the sibling dynamic between Ben and Zoe, with Ben becoming Zoe's guardian when their parents passed, but with Ben's health issues, Zoe, in turn, became his keeper of sorts. This was a mostly angst-free story, but the minimal amount of angst was just enough to take everything up a couple of notches. Josephine Myles does quirk and does it well, as proven once again with her 4.5-starred Handle with Care. ♥

Purchase Handle with Care on Amazon.