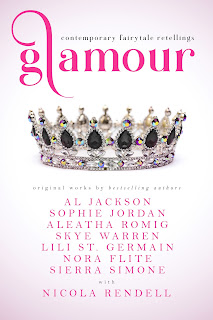 Note: This ARC was provided by the authors via L. Woods PR in exchange for an honest review.

He gave me the up-and-down again, and not just zeroing in on my cleavage either, but lingering on my lips and my throat. He glanced over at his grandma and snuck a little grab of my ass when she was looking away. And Dave said into my ear, “I wouldn’t be so sure about that,” as he sprinkled some cheese into the eggs.


Glamour is an anthology composed of eight stories inspired by classic fairy tales and children's literature, each one written exclusively for this collection, although I wouldn't be surprised if any or all authors are have or will be making plans to release their stories individually later on since that appears to be the trend. The eight stories in this anthology are as follows and in the order in which they appear: Music Box Girl by Sierra Simone (inspired by Twelve Dancing Princesses), Bedtime Story by Skye Warren (inspired by Sleeping Beauty), Ripples by Aleatha Romig (inspired by The Prince and the Pauper), Royal Mattress by Nicola Rendell (inspired by Princess and the Pea), In a Stranger's Bed by Sophie Jordan (inspired by Goldilocks and the Three Bears), Broken Harp by Nora Flite (inspired by Jack and the Beanstalk), Red Hot Pursuit by A.L. Jackson (inspired by Little Red Riding Hood), and Knot by Lili St. Germain (inspired by Rapunzel). Some of the older tales have various origin stories and versions, so I thought it best not to mention specific authors connected to them. Just FYI, the stories in Glamour are NOT children-friendly.

For transparency's sake, I only read four of the eight stories: Music Box Girl, Bedtime Story, Royal Mattress, and Red Hot Pursuit.  The authors who wrote the aforementioned are the ones I'm most familiar with and whose work I've read and loved in the past, so they were the ones I headed straight for when I received the book. I hope to be able to read the remaining four stories in the future, but this review will focus solely on the four that I read. The two that stood out most were Royal Mattress and Red Hot Pursuit by Nicola Rendell and A.L. Jackson, respectively. The former was a romantic comedy story, one that had a hero with peerage but who would prefer to be known for the business he created from scratch, Royal Mattress, and a heroine caught in the mother of all snowstorms and finds help and hearth and the man who lays claim on her heart (plus his kooky grandmother hoping to prove she's a princess). The latter is a more serious read of sorts between two individuals who prove that the line between love and hate can be blurred by lust but once it's crossed, trust and respect are necessary for love to truly prevail.

I adored Nicola Rendell's Princess and the Pea-inspired tale. She, once again, showcased exactly why she's quickly become a new favorite go-to author of mine, especially when it comes to rom-coms. Her main characters, Ivan Alexander Hallsett Ratislav Stefanik IV, Exiled Prince of Greater Moravia and Lower Bohemia--but he prefers to be called Dave--and Lisa Anne Smith--yes, she knows how mundane and common her name is--are charming and witty and her story is fresh, with equal amounts of frisky and flirty and all-around fun, fun, FUN! This was a fast-paced read, and readers get an absolute bonus burst of funny in the form of Grandma Katrina, Dave's grandmother. I honestly couldn't find a single thing to nitpick over. Heck, I'm not even going to wish the story were longer since this had everything I could have wished for in any contemporary romance book, regardless of length. If I had to choose my absolute favorite in the anthology, it would be Royal Mattress, which receives five-plus stars.

In the case of the Little Red Riding Hood-inspired story from A.L. Jackson, this had all the goodness that I look for in any book that uses the enemies-to-lovers trope. Main characters Broderick Wolfe III and Lillith Redd hate each other but there's an underlying curiosity on Brody's end as to who the woman who stirs his blood unlike any other is--and with just the fiery emails they've exchanged to boot, and when these two finally do meet, it's guaranteed to be memorable but not in the way you would think. Jackson is able to tell such a full-bodied story in a limited number of pages and it's more than enough to not only make you want a happily-ever-after for these two people who so deserve it, but there are also peripheral characters who spark your interest. And yes, this is a series starter of sorts, so I'm looking forward to more from Gingham Lakes. The one hiccup was Brody was Broderick III yet his father was Broderick Senior. Shouldn't that make Brody a junior in the equation? Red Hot Pursuit garners five stars.

For Skye Warren's Sleeping Beauty-inspired tale, fans of her wonderfully written The King, which is the first full-length novel in her Masterpiece duet, will recognize eighteen-year-old Jessica Beck. Here, she's on the run with her six-month-old son Ky, leaving her abusive ex and the town of Tanglewood behind. She ends up in Provence when she's stopped by Sheriff Finnegan Locke. I liked the simmering attraction between Finn and Jessica, but I confess that I was surprised with how their story played out and how it ended. Also, Jessica's baby in The King is a couple months older than he is here in Bedtime Story, and Jessica here is eighteen, yet she's just a bit older than Penny and Penny wasn't eighteen in The King. Still, I enjoyed this Masterpiece-connected short story and give it four stars.