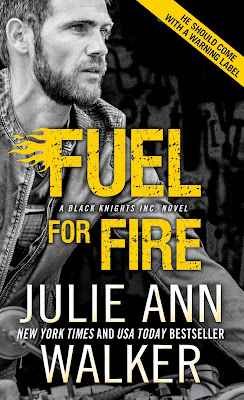 Hooray for quick turnarounds in a book series! Just three months after the release of the ninth book, we now have the tenth addition to Julie Ann Walker's bestselling Black Knights Inc. series. Fuel for Fire is mostly about BKI operative Dagan Zoelner and CIA analyst Chelsea Duvall, but if you're familiar with the series, you know that there are sneak peeks at potential other couples throughout, namely the one I've been waiting for most (and the one I thought would be in the tenth book but will, instead, be in the eleventh one), Christian Watson and Emily Scott, and one that has more than piqued my curiosity (and the one I'm now hoping will be in the twelfth--and possibly final?!--BKI book), Colby "Ace" Ventura and Rusty Parker. Christian and Emily have been all passive-aggressive with their attraction for a while now and I can just imagine how explosive they'll be once they, you know, get it on. Ace and Rusty, on the other hand, I'm itching to read about because I'm a self-confessed M/M romance fangirl and I'm always curious to see how authors I like are going to end up tackling the sub-genre. But I'm digressing once again...

Book number ten starts off with Dagan, Chelsea, Christian, Emily, and Ace in London as they try to find a way into the well-weaved web of one dangerous man nicknamed "Spider", otherwise known as Roper Morrison. Chelsea is the bait, and while they do get more than a foot into the door, things don't go according to plan. Now, they've got Spider's men on their tail. At the same time, Dagan's and Chelsea's attraction towards each other comes to a head, but Chelsea is at the point in her life where she wants more and Dagan is hesitant, and not only because he's unsure if commitment is something he's ready for. The manner in which he was fired from the Agency looms over him, and he doesn't believe he's the kind of man worthy of someone like Chelsea. However, she's got a secret of her own, one that could very well destroy any chance for the two of them to have any sort of future together as a couple. Dagan and Chelsea will have to figure out how to put a stop to the elusive Spider's men and his evil doings as well as learn that in order to live in the present and face the future, they'll have to deal with their painful pasts.

As always, I enjoyed the action and suspense in the novel and the romance aspect was nothing to sneeze at either. Julie Ann Walker knows how to inject every single story she's written that I've read with just the right amount of heart-thumping excitement to get that blood flowing. Curiously, my heart went out to Steven Surry, Spider's head of security, because the man had a story to tell as well and the outcome had me tempted to shed a tear or two. Now, with as far as whether the whole Spider scenario is over and done with, well, you'll have to read the book because I'm trying to keep this review of mine as spoiler-free as humanly possible. Dagan and Chelsea were an interesting couple, though I confess that they weren't my favorite since I think Chelsea's secret and her decision to keep silent for as long as she did had me thinking she really wasn't all that worthy of someone like Dagan. I was happy to see familiar faces who've had their time in the spotlight and now I'm excited for Christian and Emily's time, which is up next, as well as Ace's, which is hopefully with Rusty. I'm giving Fuel for Fire four out of five stars. ♥

Read my reviews for the Black Knights Inc. series: