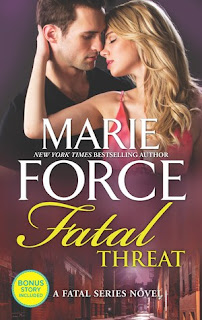 “Do you still love me after the insanity I added to our already-insane life by taking this stupid job?”

“Do me a favor, and don’t ever figure that out.”

Sam smiled and kissed his chest. “You got it.”

Confession time: My first ever Marie Force read was a little over a year ago and it was a two-fer in the form of the prequel novella and the first full-length novel in her widely popular and much-loved Fatal series, One Night with You and Fatal Affair. It was quite an introduction and I wanted so much more of Metro PD Detective Lieutenant Samantha Holland and Senate Chief of Staff turned Senator Nicholas Cappuano. Well... Here's the embarrassing part of this confession of mine (like my admission that I hadn't discovered Marie Force just last year was embarrassing enough): I only got around to reading all the currently available books in the series within the past couple of weeks. Yep, it took me a year to read the second novel and all the rest. You know the saying "Better late than never"? Well, it's true. After having gone through books two to eleven (and that includes one more novella), I've come to the realization of how much I would have missed out on had I not read the rest of the series. So, I'm experiencing a teeny, tiny bit of a (HUGE) hangover of all things Sam, Nick, and company. But, let's get on track and focus on Fatal Threat, the eleventh full-length novel and thirteenth overall release in this romantic suspense series.

Just as MPD Detective Lieutenant Sam Holland and her partner Detective Freddie Cruz find a floater, she's suddenly and inexplicably hauled away by the Secret Service and taken to an undisclosed location. With the rest of the Holland and Cappuano clans brought in as well, Sam is itching for an explanation, especially since her husband, Vice President Nick Cappuano, is still in Iran. Could something have happened to him? Losing the only man who has ever truly owned her heart and soul would be unbearable. But then Nick shows up and the reason behind the Secret Service's action starts to become clear: a threat has been made against the Vice President of the United States and his family and it's a viable one. When Sam recalls something important from her past, the authorities led by FBI Special Agent in Charge Avery Hill chase after their best lead so far, but in its wake, Sam is left reeling. And then secrets from her husband's past are on the verge of being revealed to the public by someone who Nick should have been able to trust. When Sam's on cache of secrets are leaked to the press, Sam and her team hurry to put each of the seemingly jagged pieces together before Nick's reputation is damaged beyond any sort of repair.

Talk about twists and turns and one hell of a shocker of a reveal! Marie Force piled on the suspense amidst the romance and there was tension coming from all sides in this latest Fatal addition and she left me both sated at the end but also craving for more, especially with what could be in store for Sam and Nick, what with that sneak peek of Fatal Chaos, the next novel which is slated for release in (GASP!) February of 2018. Fatal Threat highlights the sacrifices that Nick, Sam, and their family have to make with Nick's position as VPOTUS. I appreciated that the focus here is on how Nick's job affects his wife and son and the rest of their relatives since a lot of the series has been about how concessions have been made for Sam and her choice to remain a very active member of the MPD. As always, fans and readers of the series get snippets of how the prominent supporting characters are doing in their respective lives, and can I just say that the bonus short story, Bringing Noah Home, was the perfect add-on to the love story of Avery Hill and Shelby Faircloth, which got all sorts of complicated in Fatal Threat. With her patented brand of romance and suspense, Marie Force's Fatal series continues to awe and impress. Five-plus stars. ♥