Review: FAST Balls by Tara Lain (Balls to the Wall #4) 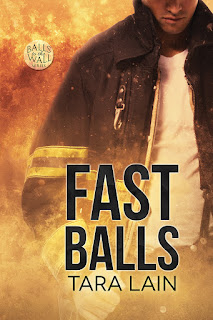 FAST Balls is the fourth and latest book in the ongoing Balls to the Wall series from author Tara Lain. If you've read the first three books, Jerry Wallender should be more than familiar, being a constant and memorable presence. He may have decided to become a firefighter at twenty-six but he's good at what he does, which work out well for him since he doesn't really consider himself all that smart. Maybe it's enough that he's good at his job and is basically a good guy in general, rarely allowing anyone to rain on his parade or piss him off. Maybe that's why fellow firefighter Michael "Mick" Cassidy find himself rather fascinated with the openly gay man. How could someone be proud to be queer when Mick's been taught all his life that being queer was a sin. At war with his long-held beliefs and his growing feelings for Jerry, Mick may have to decide if he wants to be his father's son or to be his own man.

Jerry has always been such a great supporting character in the series--perfectly likable, if a bit clueless at times. What he may lack in terms of academic intelligence, the man more than makes up for when it comes to emotional maturity and sensitivity. So, his being paired up in his own book with someone like Mick--who was introduced in the series in Fire Balls and was an out and out homophobe--had me raising an eyebrow or two. Well, color me shocked with how everything played out between the two of them and what Mick's back story was. Mick's cluelessness had to do with things that mattered more than what you could find in a textbook and it was rather fascinating to see just how much he changed in this book. The guy grew on me, and thankfully so! The addition of Jezebel was a good one, but this was totally Jerry and Mick's love story. I'm giving FAST Balls four out of five stars. ♥

Read my reviews for the Balls to the Wall series: