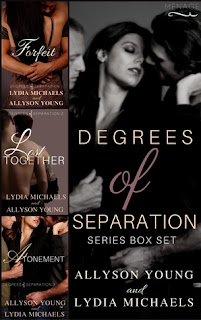 Note: This ebook was provided by the authors via Xpresso Book Tours in exchange for an honest review.

When it comes to triads, it takes a lot to convince that the relationship among all three people involved is one equal footing. I've read a few stories involving threesomes and triads, from MFM to MMF to MMM, and more often than not, there's always one pair that ends up having a far stronger bond, which makes me wonder how a relationship that has three people in it work out in the long run. In the Degrees of Separation Box Set, we're introduced to the three main players--Austin and December Garret and Cordovan Bay--and their complex love story is told by way of three books, Forfeit, Lost Together, and Atonement, all full-length and must be read in order.

Austin and Ember are married and happily so, but they find themselves floundering when Austin loses his job and deals with the stress through alcohol. The one person who's been there for them through thick and thin is Austin's best friend, Cord. When things fall apart because of his addiction, Austin pushes Ember towards the man he knows will catch her--Cord. But sleeping with a man other than her husband, even with his blessing, leads Ember into a tailspin and she ends up running from both men, each one claiming a piece of her heart. Austin and Cord will do anything to keep Ember happy, and when all three of them form a three-sided relationship, they'll not only have to deal with the intricacies of such a complicated union but will have to face the judgment of those closest to them.

I liked how the story began with the established roles of Austin, Ember, and Cord and how those roles shifted as everything progressed. The battle with addiction wasn't Austin's alone, and you could feel that what he was going through weighed so heavily on the two people who loved him most. My heart broke for all three but it empathized more so with Cord. This was because Austin and Ember were married and had a bond that had people seeing them as a couple by law and in every other sense, while Cord was like the insider who actually felt like an outsider from the get-go that vows were exchanged between the two people he cared about. This is why their coming together had me on edge. So, did they convince me that the love they shared was more or less equal on all sides? Yes, they did, and Allyson Young's and Lydia Michaels's storytelling has me giving the Degrees of Separation Box Set 4.5 stars. ♥