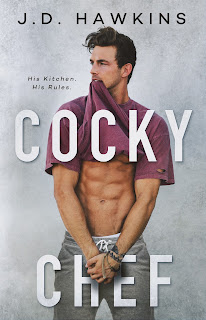 Cole Chambers is a celebrity chef who has a hard-earned reputation for being a perfectionist and it's that perfection that has made him a wealthy man with restaurants that people line up for. He expects a great deal from his employees, so when a new chef at his LA-based restaurant Knife tweaks with a recipe of his, he wants to have a word with his newest chef who has no clue that the guy she cusses at for questioning her cooking is her employer. Instead of firing her, Cole takes an interest in Willow (whose last name isn't mentioned in the story), both professionally and personally. There's a fire in her belly that he admires and respects, and he can't deny that he's attracted to the talented chef. When Willow's ambitions run into conflict with Cole's own plans for his restaurant empire, things come to a head. Maybe it's true--too many cooks spoil the broth...and one hot and heavy romance.

Save for a few grammar issues, J.D. Hawkins's Cocky Chef was a good read that had entertaining banter between the main characters and a story with enough heat to battle even the kind you'd find in kitchens of Michelin-starred restaurants. I liked Cole, who may be cocky but its the kind of cockiness that he can back up with experience and action. There's more to him than meets the eye, and he and Willow are paired quite nicely, like a fine wine with a scrumptious meal. There isn't a great of angst or drama that happens in the story, although the conflict between Cole and Willow isn't the kind that as easily resolved as that of the whole burger situation that the two found themselves in earlier in the book. Their story made me think about which one I'd choose--a person I was falling for or going after my dream. In the end, Hawkins underlines the possibility of having both. Four stars go to Cocky Chef. ♥