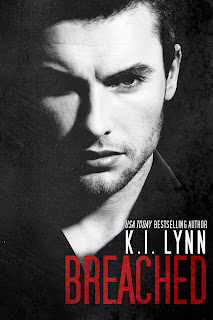 For making me feel things I shouldn't.

For the emotions that heaved inside of me.

For the possession my body demanded.

When I first learned that K.I. Lynn was going to be adding another book to her bestselling--and one of my absolute all-time favorites!--series Breach, I had my fingers crossed that it would be told once again from Nathan Thorne's point of view, which is how the two novellas, Dissolution and Release, were written. And thank you crossed fingers because that's exactly what fans and readers get with Breached, the fourth full-length novel in the collection! Did you take note that this was a full-length novel? Yes! We weren't going to get just snippets or a select moment or event that's already been told but from the viewpoint of Delilah Thorne neé Palmer. We've got Nathan from start to finish, with the first chapter in Release, the stuff in Breach and Dissolution, and a bit of Infraction's first chapter.

Nathan Thorne is a broken man, one who has lost the two people who gave him purpose. Now, he barely lives a life worth living but spends most of his days trying to tamp down on the beast that demands to be let out. Interactions with his family and those closest to him are limited, but when an offer from one of them comes, Nathan knows that he has no other option but to take it. What he doesn't expect is to meet a woman who becomes the harbinger of change. He hates her--hates the fact that she makes him feel things he believes he shouldn't, think of all the dirty things he wants to do her that he believes would scare her away. But Delilah Palmer is nothing like he expected, but having her may put her in danger and losing Lila could be the one thing that absolutely destroys him.

I'm not sure whether or not I should recommend that you read the series in order since Breached basically retells everything that's in Breach, but I do love that now I have that particular part of Nathan and Lila's story from both their perspectives, so yeah, go ahead and read all the books in the series in order. You'll have a better appreciation for what Nathan and Lila have to go through as individuals and as a couple. The series did come out with a third anniversary box set in April of 2016 that includes the first five releases--Breach, Dissolution, Infraction, Reciprocity, and Release--so you can read that and then head into Breached or simply start Breached on its own. It's totally up to you. Whichever way you decide on, you're in for one hell of a fucked-up yet addictive ride with Nathan and Lila.

K.I. Lynn launched her writing career with Breach and she's most probably known for that book and the series, and there's a reason for it. Yes, it was inspired by a bestselling series of books and a box-office hit collection of films, but Nathan and Lila's story stands on its own merits. Lynn's writing pulls you in, at times shocking but always demanding of the reader's attention, and with Nathan and Lila, you want to know what demons are chasing them and why they're so drawn to one another. These two have their own unique voices, and seeing things through Nathan's eyes broke my heart, but it also proved the resilience of his spirit. I was surprised this novel didn't cover the originally released books, but that may mean there'll be more Nathan to come. Five-plus stars go to Breached. ♥

Read my reviews for the Breach series: